Lionel, necromancer and police consultant, finds himself closer to the Devil than he ever wanted to be. But even for a necromancer, life goes on, and murder happens. The next crime scene is just around the corner, and Lionel will do his job… ideally without Lucifer looking over his shoulder.

After a traumatic experience, Lucifer knows he has to protect his necromancer, mostly from the other man’s own stubbornness and ignorance. Lionel is not quite as human as he likes to think, and to Lucifer's great annoyance, Lionel hasn't given up on his bad habit of running into situations without thinking.

Lionel doesn’t know how he feels about the Devil, and he doesn’t know what he wants in his life. Lucifer knows what Lionel needs, but getting the necromancer to accept that is the difficult part. And of course, there is murder happening in town, and it is not the boring human-on-human kind of violence. This time around, it looks like immortals are involved. Solving the case will require Lionel to accept who he really is while Lucifer wants his boyfriend to embrace who he truly can be. Lives may depend on it.

The Devil’s body on top of mine, his mouth stealing my breath, his woodfire smoke-and-spices scent all around me -- that was not something I ever thought I’d get used to. Yet here I was, Lionel Hawkes, consultant for Brunswick PD and accomplished necromancer, my cock rubbing against Lucifer’s belly and his own erection as he was doing his damnedest to kiss me senseless. My lips were already tender, but the soft lighting dipped his bedroom in an amber glow, and that made me care less about the state of my lips somehow… as long as he kept coming back for more kisses. I wanted to bury my fingers in his baby-cat hair, but Lucifer had my wrists crossed over my head, his hand holding me there. I could struggle, but he wouldn’t let me go. I’d tried that before, and he’d kindly informed me that I got to move my hands when he wanted me to. He fucking owned me.

I bucked up to get more friction and heard his deep voice break into a chuckle that made my entire body tremble.

“Sweet Nelly, is there something that you want from me?” he said with laughter smoothing around his words like warmth around a fire.

That fucking asshole. He knew exactly what I wanted. I wanted to come. He’d put me on my back in his too-large and weirdly round bed with the super-soft cotton sheets about an hour ago, and then he’d started with kisses, with touch, with friction that was just never enough.

“I have work in the morning. I just want to come and go to sleep,” I said. I’d been off for three weeks after that thing with the crazed serial killer, a.k.a. No Longer Quite So Sexy Mitch, who’d drugged and abducted me. But tomorrow was my first day back. “And you seem to have one hand free, so if you would, Lucy?” I looked down to my leaking cock. Damn, my belly was slick from our combined precum.

I wiggled under him, feeling the soft sheets I was lying on. I tried looking away as if this whole lovemaking thing bored me. Lucifer had drawn the curtains, but I didn’t really think they were thick enough to hide what he was doing to me. Obscure it, yes, but if anyone with a daring heart got to his wilderness of a home on this cold-ass November night and peeked up, they’d know exactly what was going on in the Devil’s bed. I’d complained about it two weeks ago. Lucifer had smirked and said, <em>If anyone does dare to come here, they should be rewarded by getting a glimpse of your face, writhing in ecstasy because you have my cock deep inside you. It will serve them well to think of it while I punish them for the transgression</em>. So typical -- boisterous Devil-speak.

And that was just so Lucifer, but since the room was partially lit, I saw him pull back and look down at me as if he were a cat and I a canary, caught between his claws with my wings splayed. He wanted to fucking torture me, I could see that in his sapphire eyes. Not actual torture, but he wanted me in a writhing puddle of need, so desperate I begged for his cock.

Heavens knew he’d fucking gotten me into that state before.

Before Lucifer could make another noise, before I could try to get a wrist free to jack myself after all, my phone rang. Lucifer’s eyes darkened. “I told you to turn that off,” he said. He didn’t raise his voice. Lucifer didn’t have to. He was the fucking Devil. His voice carried.

“And I told you I need to be reachable,” I said as the <em>Jaws</em> theme music grew louder. “Let me up, I need to go answer that.”

Oh, damn his stupid sex talk. It got me in entirely the wrong mindset to achieve my current objective -- answering the phone. And I would bet a spell he’d stolen that line from one of the countless romance novels he read. There was currently a pile of them near his reading armchair by the window wall. He got up to two or three a day sometimes. That one weekend, when I’d told him I just needed quiet and hot cocoa after escaping the fucking basement a psycho killer had dragged me in to kill me, Lucifer had actually complied. He’d made me sit on the couch in his rich-people house where he let me stream just whatever sappy thing I wanted to watch without comment from him. In fact, Lucifer had refilled my mug with hot cocoa whenever it was empty, and sat there as close as I would allow it like some classical statue, reading through a stack of those damn novels. He had taken a reading break every couple of hours, and his breaks had only consisted of getting me off. If I allowed it.

I had allowed it. “You just read about that in your damn book?” I had asked after he was done with one of his breaks, my naked back pressed against his chest, my spent cock still in his sticky hand.

He bit my earlobe before he answered. “The things I want to do to you, Nelly… They aren’t in any of those books.” 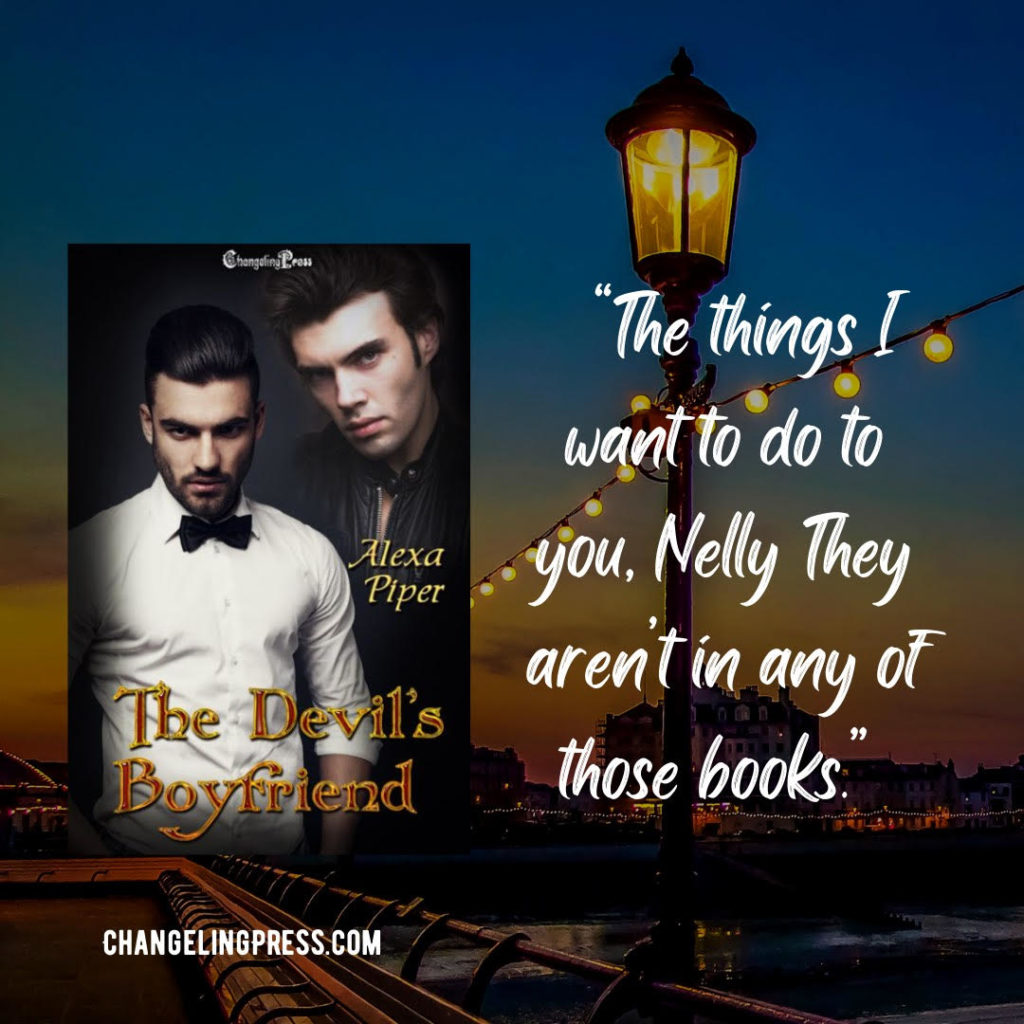 One lucky winner will receive a $10.00 Changeling Press Gift Code!