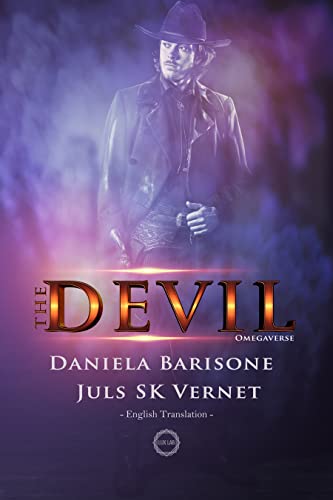 Skyler Reyes is a man, but also an Omega. Native Americans call him nádleehí, Two Spirits, but he struggles to accept the dualism of his identity.

He flees from a world that perceives him as nothing more than a freak. To do so, Skyler becomes El Diablo. He is an outlaw, but more than anything, he lives to protect his gang of outcasts.

Horace Lewis is an Alpha, and he has a mission. The detective agency Pinkerton puts him in charge of catching Skyler dead or alive. He must capture him and deliver him to them at Carson City. Problem is, he is not the only one who’s trying to capture Skyler and collect the bounty.

Momma Says: 4 stars⭐⭐⭐⭐
Omegaverse in the Wild West! I've read a fair amount of omegaverse, but this is the first time I've seen it in this setting, so I was intrigued as soon as I read the blurb. And what about that cover? I absolutely love that cover, and it's kind of perfect for this story.
This is a quick read, easily finished in about an hour, but what it lacks in pages, it makes up for in story. Of course, it's a quick shift from enemies to lovers for Horace and Skyler, but it works well with the alpha/omega storyline. Both of these guys are hardened by the lives they've lived, but both somehow still have such great hearts. There are several tropes wrapped up in this alpha/omega Wild West romance, including interracial, found family, opposites attract, forced proximity, cowboy, lawman and criminal... I'm sure I've missed some, but my point is that it all comes together for a thoroughly entertaining story that grabbed my interest on page one and held on tight until the very last word.
This is translated from its original Italian, and I have to hand it to the translators because this is a pretty smooth read all the way through. There was an odd phrasing or two, but nothing that didn't make sense to the story or interrupted the flow. The story is well done, and I could easily read more set in this world. So, I'd say if you like omegaverse and you're looking to while away an hour or so, this is one to check out.