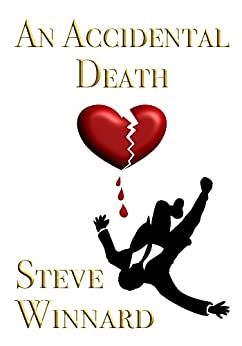 When Paul Trueman, Businessman, Magistrate, and Pillar of the Community awoke on the Friday before Christmas he had no idea that one decision he would make that morning would have such far reaching consequences. Consequences that broke old relationships…. Consequences that made new friendships….. Consequences that would lead to death and murder in the quiet rural Derbyshire Dales.Detectives Dave Baker and Cath Mulvey are faced with the task of having to quickly unravel a complex web of events to identify the killer or killers before time runs out for the next victims as well as themselves.

Momma Says: 3 stars⭐⭐⭐
An Accidental Death is a fast-paced read that falls somewhere between crime thriller and police procedural. The storyline is certainly busy if a little convoluted at times, but Winnard brings it all together piece by piece. That's not to say that it all comes together because Detectives Dave Baker and Cath Mulvey are so good, they figure it all out - I'm not sure anybody is that good. It's kind of six degrees of separation-ish, and some of it comes down to luck and some to coincidence. Oddly enough, it was some of the luck and coincidence that I found the most intriguing, which says something about the author's handiwork. Normally, I prefer the building of clues as the detectives move closer to a reveal, and I like to suss out the villain. This one gives us the who of it, or more accurately, the who's from the beginning. The thing about that is we're given what feels like varying degrees of badness, and how they all play a part is what kept me turning the pages to see what would come next. I've tried to be vague to avoid giving anything away, so I'll just wrap it up by saying this is a solid debut by Steve Winnard, and I'll be interested to see what he comes up with next.