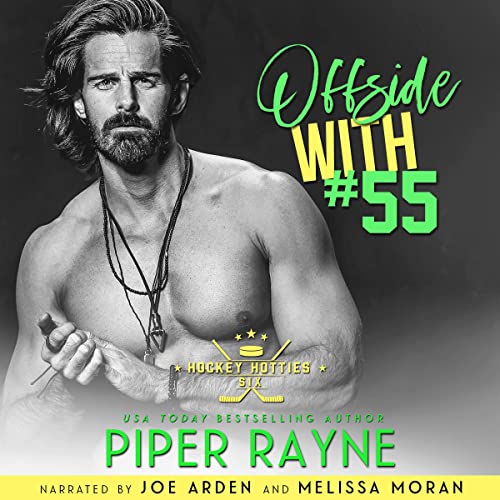 The last thing any professional hockey player wants is to be the old man in the game. The guy who doesn’t know when it’s time to retire. Still, I can’t bear the thought of leaving the game.

This past year I’ve reflected on all my regrets, and I told myself that once I retire it’ll be the time to find the right woman. But this is where it gets tricky.

I think I’ve found her—although she’ll deny our connection to anyone who asks. We’ve been sleeping together casually, and since I’m still playing hockey, I’ve let her get what she wants—me—whenever she wants.

After being told my career as a player is over, the owner of Florida Fury grants me a shot to stay in the game. A coaching position I didn’t know I wanted until it was offered. The catch? He’s also passing the family business down to his daughter.

The woman who’s been in and out of my bed for the past year. Which means the woman I intend to make mine is now my new boss.

Momma Says: 4 stars⭐⭐⭐⭐
I went into Offside with #55 fully expecting some fireworks, and this pair doesn't disappoint. Jana and Kane butt heads over pretty much everything, and their chemistry is undeniable, whether one of them admits it or not. Basically, Kane and Jana have a secret arrangement - kind of a means of scratching an itch - until they move into their new positions and things get complicated. At this point, they're trying to navigate their new jobs and still keep the team on track, which may prove to be more than they can handle, let alone having any kind of personal relationship. Actually, some of my favorite parts of the book were during Jana and Kane's growing pains as owner and coach respectively. Then the personal stuff puts them to the test as they deal with yet one more thing (or two). Part of that is the twist that tests the limits of the relationship, so I'll just leave those details in the book where they belong.
Joe Arden and Melissa Moran give voice to these characters, and they do it wonderfully as expected. At the risk of repeating myself - I feel like I've said this a lot lately - Joe Arden's sexy voice is always a pleasure to hear. I seem to be listening to him a lot lately, and he never disappoints. I haven't listened to Melissa Moran in some time, but she's as good as I remember. Both narrators bring out all the emotion of the story. Whether Kane and Jana are going head to head or all over each other or somewhere in between, it comes through in the performance, and it makes for a listen that makes you want to just keep going, one that you won't want to hit that pause button for anything.
So, an entertaining and engaging story with terrific characters, and narration that's everything I could want from this book. It's a solid conclusion to the series, and I haven't had the pleasure of getting every couple's story yet, but so far, I'd have to say Piper Rayne saved the best for last.