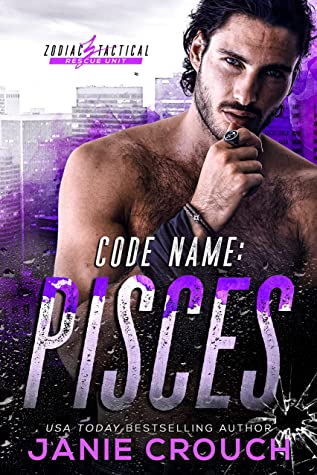 My code name is Pisces. The stars say I’m independent, wise, and intuitive.Still waters run deep.I’m the leader of Zodiac Tactical’s guardian unit. We’re the bodyguards—the ones who stand toe to toe with danger and refuse to give any ground. We protect people who need it most.But what if who needs it most is a spoiled diva?I don’t normally take on movie stars. I don’t have time for the drama nor their self-centered lifestyle. If they don’t take their safety seriously, how can I?But there’s something different about Alyse Peterson. On the outside America’s Glamor Princess is everything I want to avoid. But behind her perfect smile and sapphire eyes is a heartbreak she’s hiding from everyone.She has secrets. And a stalker willing to kill to get to them.My code name is Pisces. And anybody who wants to get to her, will have to go through me.

Momma Says: 5 stars⭐⭐⭐⭐⭐
First things first, just look at that cover! Maybe it's just the tall, dark, and sexy look that does it for me, but had I never read a Janie Crouch book, I would've grabbed this one based on the cover alone. That is seriously one swoony cover. But I have read Janie Crouch, and I always expect great things from her, so I eventually turned past the cover and fell in love with Tristan. He and Alyse have such great chemistry, and the whole stalker storyline is super creepy, so we get a deliciously steamy romance with more feels than you can shake a stick at and an impossible-to-put-down suspense/thriller. Then, as if that isn't enough, we get to visit with some favorites from romances past - don't worry, if you're new to the fabulousness that is a Janie Crouch romantic suspense, you can read this one as a standalone. Fair warning, though: it just takes one, and you'll be hooked. As for me, Pisces has my heart for now, at least until the next hero Janie dreams up.