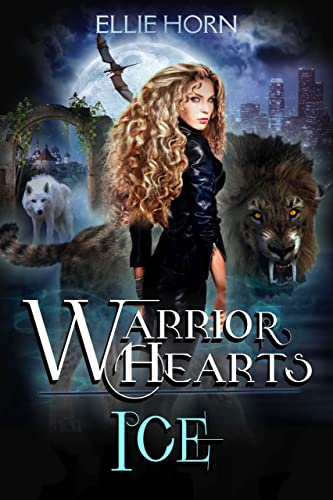 Kitani’s one of the last females of her kind. Thanks to that, she’s desired by every shapeshifter on the planet.In walks Cody—who is six-foot-plus of gorgeous predatory muscle—and annoying as hell.But when he dashes his way into her dreams, Kitani can’t ignore the call of her heart.Is there truth to the ancient lore about fated soul bonds? Is this arrogant warrior really her future?There certainly are worse possibilities. A power-hungry villain appears on the scene, and he needs a female to secure his place as the leader of his werewolf pack. Setting his sights on Kitani, he vows to destroy anyone that stands in his way—including a certain sexy warrior with sculpted biceps and six-pack abs.Is Kitani destined for a life of misery? Or can she outwit the rogue and be with her one true love?If you love edge-of-your-seat, slow-burn romantic adventures with engaging characters that are so real you can feel their heat steaming off the page, then this is your book.Get Warrior Hearts: Ice today.

Notes:Ice is the first book in a series that shows how love can push boundaries, embrace many forms, and above all, conquer anything that it faces. The intimacy within is one on one and meaningful, but the main characters find themselves in uncomfortable situations that may bother some readers.Like all the forthcoming books in the series, Warrior Hearts: ICE stands alone and ends in a happily ever after.This smouldering romance is intended for mature readers.

Momma Says: 4 stars⭐⭐⭐⭐
First, check out that cover! All those elements that stand out! And to think there's all of that and more inside. This is my first experience with Ellie Horn, and I am impressed. I was surprised at how long this first in the series is, and maybe it is a little longer than absolutely necessary, but I liked these characters so much that I didn't mind the extra time with them.
There is a lot going on in this fascinating world Ellie Horn has created and a lot of characters to get acquainted with. And here's where I was most impressed: the character introductions and world-building are done organically throughout the story, so there aren't a bunch of those annoying info dumps. We also get some shifters and various creatures that you don't often see in this type of fantasy, which is a nice change and keeps things fresh. This is also a MFM fated mates shifter romance, and it's a slow burn - another refreshing change from the norm.
The characters are likable and well developed - I guess I should say that a lot of the characters are likable. Some, not so much, but that's to be expected, especially with the intrigue, suspense, and danger our characters face. The romance is easy to root for. It is a fated mates love story, but I really like how the characters get to know each other and how things progress between them. There's a fair amount of snark and sarcasm, and I do love some witty dialogue.
According to the blurb, Ice is a standalone in the series, but I really hope these characters at least make an appearance in future books. Needless to say, I'm definitely gonna be reading the rest of the series. I'll happily escape to Ellie Horn's imaginative world of shifters and their fated mates.