James and Merrick (Take a Shot, book 1) are just beginning to navigate their relationship, and their best friends, Shawn Lasting and Henry Martin, are doing their best to be cautiously supportive. Shawn and Henry frequently come into contact, but after the tension and animosity of their first meeting, they remain wary of each other.

When Shawn finally confronts Henry about his animosity, their tension proves to have been sexual all along and quickly transforms into a long-distance relationship. With encouragement from Shawn, Henry explores his sexuality far more than he’s ever previously allowed. Meanwhile, Henry encourages Shawn to work toward making some of his own lifelong dreams a reality.

When Henry informs Shawn he’s in love with him, Shawn balks and explains that he’s always been a no-strings sort of guy, leaving Henry feeling stung and rejected.

A difficult family experience at his mother’s funeral makes Shawn question some of his preconceptions, and he realises that what he feels for Henry is love. Now, he needs to ask Henry’s forgiveness and hope that it will be enough to let them both have a love neither ever thought possible.

NOTE: The beginning of this story runs concurrently with book one, James and Merrick, but is told from the POV of their best friends, Shawn and Henry. Because of the overlap, this one can stand alone and readers do not have to read book one first.

Shawn Lasting leaned back in the café chair that was surprisingly more comfortable than it looked and stretched his legs out, taking a sip of his dry stout. The table had ceased its wobbling only after Shawn conscripted a couple of beermats to act as shims. There wasn’t often a lot of foot traffic worth watching from the pub’s front beer garden, despite the proximity to Kew Gardens and the National Archives, but it was a quiet neighbourhood pub that suited the situation best that evening.

Shawn adjusted the shawl collar of his jumper a little higher as a breeze of typical British summer weather delivered a chill. He was waiting for his best friend, James, to join him for their usual Thursday dinner get-together and was beginning to question his decision to sit outside. Shawn’s attention was caught by a fit jogger going by the cricket grounds across the road. The jogger’s abbreviated running shorts—a throwback style that took him back to adolescent PE classes in the late 70s—showcased a pair of long, toned legs that more than made up for the weather.

James approached from around the corner while Shawn was leaning half out of his chair to watch the jogger’s progress toward the Thames. “Well, at least that explains why we’re sitting outdoors in fourteen degree weather,” James said, sitting down.

“Sheer stubbornness, I reckon. It’s summer and not raining, ergo, we sit outdoors,” Shawn said. “Anyway, I figured you could do with some fresh air. Expect this is the first you’ve been beyond your front steps since the weekend, isn’t it?”

James shrugged and took up the pint that Shawn had waiting for him. “Laying low, that’s all.”

“Not that I blame you,” Shawn said. “Especially since Michael’s little meltdown made it all public fodder.”

Shawn glanced over apologetically. “Sorry. We can leave that subject out for the duration.”

“What about what’s-’e-called? Talked to him at all?”

“Merrick. His name’s Merrick. I did talk to him yesterday, as it happens. Wanted to talk to him all week, really, and again today. But I’m doing my best to give it space. And time.”

Shawn hummed understandingly. “How did it go?”

Shawn noted the immediate change in James’s demeanour as soon as he started talking about Merrick. He was pretty certain James had never looked at ease like that when Michael was discussed, even before things had started to go genuinely bad between James and his ex-fiancé.

“Not been round to see him yet, though, right?” Shawn asked.

“Not yet. Thinking about asking him to get a coffee with me on the weekend or something.”

Shawn gave James a hesitant look. “Sure that’s wise at the moment? With that big bouncer bloke hanging around him an’ all?”

James snorted. “Henry’s not a bouncer; he’s Merrick’s mate. He explained the situation when we talked yesterday. Henry’s been his closest friend since he was in uni; he was there when Merrick went through his own nasty breakup with a control freak. He was also the one who saw that awful joke of a wedding announcement in the paper. He’s very protective of Merrick. Not so different from you, really.”

Shawn rolled his eyes. “Yeah, only difference is I don’t use my physical stature to intimidate people.”

“Shawn, your physical stature is a trace better than average. Besides, you’re all Big Dick Energy, so you don’t need to.”

“And what the bollocks is Big Dick Energy when it’s at home?” Shawn said doubtfully.

James laughed. “Confidence. You know—like you know what you’ve got and don’t have to prove it to anybody. That kind of thing.”

Shawn considered it for a moment before saying, “Well, can’t argue wi’ that.”

James just shook his head affectionately. “What are you eating?” he asked, standing to go put their dinner order in.

James patted Shawn’s shoulder sympathetically. “Add on chicken or anything?” 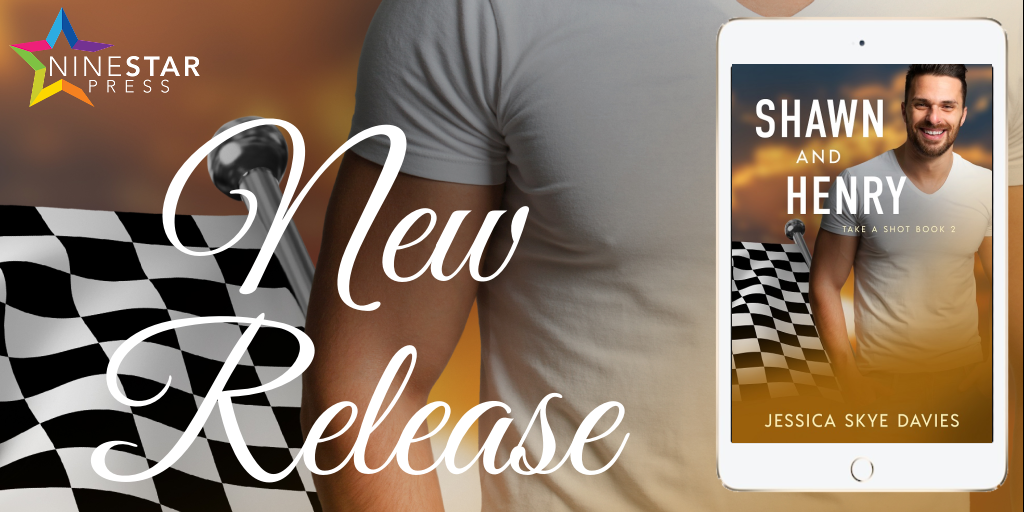 Jessica Skye Davies has been a writer since her first works were “published” in her grandparents’ living room and written in crayon. She’s been a professionally published author since 2011. Jessica lives in Pittsburgh and is active in the community, having served with a local LGBT community center for several years and currently serving with the local Welsh society. She’s often found spending time with friends, attending the symphony, watching hockey, rugby, or soccer, and moonlighting as human pillow/concierge for her official writer’s cat, Squidge.