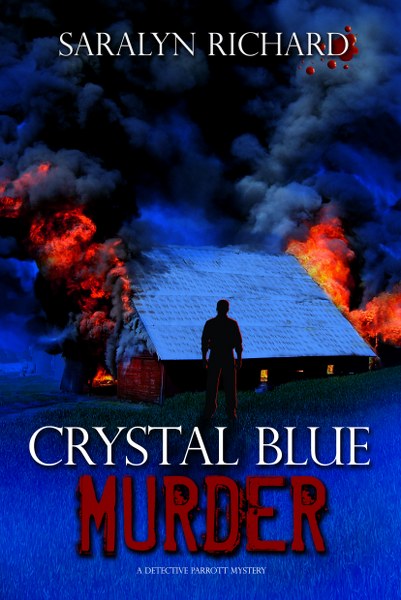 METH, MURDER, AND EXPLOSIONS OF THE HEART

In the heart of tranquil, lavish Brandywine Valley, Detective Parrott confronts a meth explosion, a dismembered corpse, and an intricate trail of deceitful secrets that shake up many lives -- including his own. When celebrity hostess Claire Whitman’s renovated barn explodes into flames, Parrott delves into the privileged lives of all who are affected. Tension from Parrott’s personal life crosses over into the case, and secrets, deceptions, and crimes create an even bigger explosion. Third in the Detective Parrott Mystery Series, Crystal Blue Murder explores the complexities of life in an entitled world where many of America’s wealthiest and most powerful elite have their own definitions of right and wrong.

Parrott was awakened by smells of pineapple chicken and warm Hawaiian rolls, one of his favorite meals. His mouth watered as if every cell were screaming to be fed. He hurried into the kitchen to confirm. “Mmm, I could eat ten plates full.”

“Here,” Tonya said, popping half a buttered roll into his mouth. “I knew you’d be hungry, so wash up and sit yourself down. I made enough for four, just in case.”

“Don’t have to ask twice.” Parrott did as instructed, patting Horace on the head through the birdcage on the way to the washroom. He called over his shoulder, “You’ve been a busy woman.”

When he returned and sat at the table, Tonya set a bowl of sauteed green beans and a casserole dish with aromatic pineapple chicken in front of him. “That’s what happens when I don’t have art class. I have to find another way to be creative.”

“You ask me, this is one luscious work of art, on its way to my stomach.” The first bite was heaven-on-earth delicious, with the sweet, tangy sauce cloaking the juicy chicken and soaking into the tender grains of rice beneath. Parrott shoveled bite after bite into his mouth.

Tonya’s lips curled. “I love watching you attack your food when you’re hungry. You might be named after a bird, but you eat like the king of the jungle.” She picked up her own fork and knife and began eating at a more leisurely pace. “When you come up for air, I’d love to hear how your afternoon went. If you can talk about it, that is.”

Still enjoying his food, Parrott said, “Why don’t you tell me about yours first?” He was stalling while he decided how much of his day he could share with his wife. He wasn’t overly concerned about confidentiality. Tonya, as a former Navy SEAL, knew how to keep information private, and at this point, he didn’t have much information to share, anyway. He was more concerned about which details might fire up her PTSD. She had made a lot of progress with counseling and therapy, but setbacks could happen at any time. He’d learned that the hard way.

Tonya’s eyes met his in a look that said, “I know why you’re delaying,” but she went ahead as if they were an ordinary couple having an ordinary conversation. “I washed your clothes, cooked the chicken, fed Horace, and read a couple of chapters in a historical novel. Oh, I googled Herman’s construction business. He’s got a neat website, lots of testimonials.”

Parrott raised his eyebrows. “Glad to hear it, but you can’t trust everything you learn from Google.”

“I know. I thought of asking Elle’s nephew Alexander if he’s ever heard of Herman or his company. Construction people talk about each other, and he may have an ear to the ground. There’s also Dunn and Bradstreet and the Better Business Bureau.”

“I admire your tenacity, but I’d stay away from asking people we know. We don’t want it getting back to Mama that we’re suspicious of her boyfriend.” Parrott pulled apart a roll and used a piece to sop up the pineapple sauce from his plate. “Bad manners, I know, but I can’t let a drop of this good sauce go to waste. Good thing I’m here at home and not at Claire Whitman’s house.”

“Claire Whitman, the party lady?” Tonya set her utensils on the side of her plate and took a long drink of water.

Parrott stared at his wife, amazed that Whitman’s fame had extended to someone like Tonya, who was raised in a totally different environment. “Long-ago party lady. She had a TV show.”

“I know. My grandmother watched it while she was ironing. Granny thought Mrs. Whitman was the perfect lady. She used her name as an example of good manners for us, growing up.” She began stacking the dishes at the table. “How do you know her?”

“That’s whose barn burned this morning. Where I was this afternoon—at her house in Brandywine Valley.” Parrott rose and patted his stomach. “Thank you for this outstanding meal. I feel like a new man. Let me clean up the dishes.”

“Really? America’s Miss Manners lives in Brandywine? My granny would be so excited.” Tonya jumped in, as Parrott took the dishes to the sink. “I’ll take over from here. You’ve had a long day. Besides, you’re going to need your strength in dealing with Claire Whitman. As Granny would say, ‘You’d better mind your p’s and q’s with her.’”

Parrott wrapped his arms around his wife and gave her a hug. “If you’re sure about cleaning up, there’s something else I want to do tonight.”

“I’m sure. Hardly any left-overs to put away, no big deal. What’re you going to do now?”

Parrott pulled back and wiggled his eyebrows at his wife. “Follow your lead, Mrs. Parrott. I’m going to make friends with Mr. Google.” 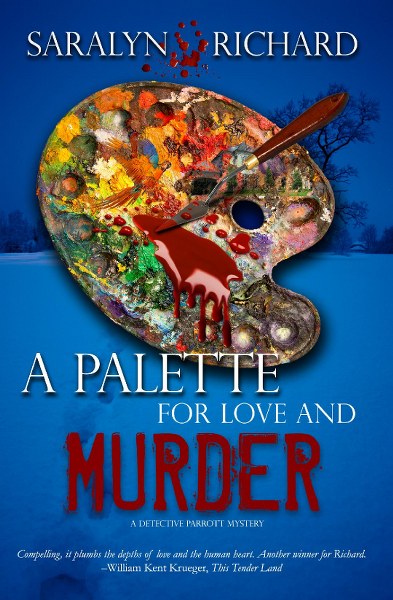 A Palette For Love and Murder

THE SCENERY IS LUSH, THE MANSIONS ARE HUGE, AND THE SECRETS ARE DEEP.

Detective Oliver Parrott’s next case takes us to the ancestral home of Blake Allmond, a renowned artist, whose paintings have been stolen from his studio. Before Parrott can get a foothold on the case, Allmond is murdered in his second home in New York’s Gramercy Park. It’s out of Parrott’s jurisdiction, but he believes the two crimes are related, and he’s got the itch to work on both. Parrott comes to realize Blake Allmond’s life is full of mystery. The theft of the paintings turns into a treasure hunt and search for a killer—and then the investigation becomes personal. 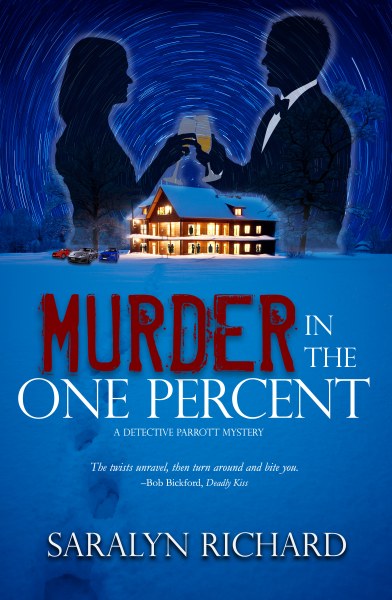 Murder In the One Percent

SOMEONE COMES TO THE PARTY WITH MURDER IN HIS HEART AND POISON IN HIS POCKET.

A lavish celebration. A rare poison. A clever plan. A milestone birthday party at a country mansion in Brandywine Valley brings old friends together, all glamorous, wealthy, and politically well-connected. Charismatic playboy, Preston Phillips, brings his trophy wife to the party, unaware that his first love, the woman he jilted at the altar, will be there, enchanting him with her timeless beauty. A snowstorm, an accident, and an illicit rendezvous later, the dynamics crackle with tension.

When Detective Oliver Parrott is charged with solving the untimely killing of one of America's leading financial wizards, he realizes this will be the case to make—or break—his career.

Ingenious and gripping, MURDER IN THE ONE PERCENT opens up to readers the opulent world of the ultra-wealthy in Philadelphia and New York—and reveals a killer that only Detective Parrott can catch. 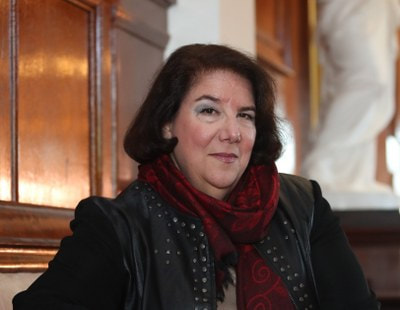 Saralyn Richard writes award-winning humor- and romance-tinged mysteries that pull back the curtain on people in settings as diverse as elite country manor houses and disadvantaged urban high schools.  An active member of International Thriller Writers and Mystery Writers of America, Saralyn teaches creative writing and literature, and continues to write mysteries. Her favorite thing about being an author is interacting with readers like you. Visit Saralyn on her Amazon page here, or on Facebook here.