Ethan Shaw—lighthouse keeper and local witch—lives a charmed life in his chilly, coastal hometown. Blessed with a flourishing garden and a stable livelihood, Ethan can’t complain. But when his husband, Captain Peter Vásquez, brings home a wounded seal after an impromptu storm, Ethan is faced with a curious situation: caring for a lost selkie named Nico Locke.

As Ethan struggles with the possibility of being infertile, insecurities surrounding his marriage, and a newly formed magical bond with a hostile, handsome selkie, his comfortable life begins to fracture. But could breakage lead to something better?

With autumn at their heels and winter on the horizon, Ethan, Peter, and Nico test the boundaries of a new relationship, shared intimacy, and the chance at a future together.

Ethan Shaw carried two knives, one for lilies, the other for veins. The blade in his left hand curved like a smile, clipping stems at a sweet, diagonal angle. The second weapon was concealed in a petite leather sheath, tucked neatly in his right palm.

The ritual called for innocence, and he had none to spare, so he searched the shoreline for white-petaled flowers—speckled with saltwater, yawning toward the sky—and remembered the folktale that wormed through Casper, spoken quietly at the pub, hollered by sailors on the docks, cooed in the apothecary, and sung by children on the playground.

Those Casper lilies, the story went, are filled to the brim with what we’ve lost.

Like snakes, the townsfolk shed their innocence, leaving it to stew in the bay, sink into the soil, and beat against the lighthouse. And like snakes, the lilies drew their outgrown magic into tangled roots and narrow stems and gilded pollen: an ouroboros consuming itself.

Most people refused to use the term—magic—but Ethan found it appropriate. Harvesting long-gone energy from a living thing felt like its very definition. Using said magic to reanimate a corpse felt less like magic, though, and more like recklessness.

He yelped and flailed before he hit the water, bracing for the icy shock. Panic shot through him. Salt water rushed into his nostrils, and seaweed snagged his ankle. Swim, idiot. November wind nipped his face when he breached, sucking at the air, clutching drenched flowers to his chest. Casper lilies never promised to be easy, of course. But Ethan Shaw still cursed as he slushed through tidepools and mud. He sighed, relieved, when his soggy shoes hit the gravel path outside the tower.

“We need a lightkeeper, Ethan,” he mocked, shouldering through the wooden door. He left his boots in a puddle on the cheeky welcome mat: You Better Be Beer! “It’s a solid wage, Ethan. Not like it’s a—” The first knife clattered on the rectangular table, then the second. Sopping flowers landed with a splat next to an unopened power bill. “—hard gig, Ethan. Just take it.” He whined through the last three words, mimicking his mother, and trudged into the washroom.

He hadn’t the time for a bath, so he peeled the wet shirt from his back, unzipped his jeans, and wrestled out of his drenched binder. The chilly water had reddened his beige skin and left his boyish face chapped and raw. Droplets clung to his chestnut hair, shorn behind his ears and around the back of his skull, and worn long at his crown, hanging in messy strings over his brow. He slicked his hair back with an annoyed swipe and scrubbed lingering sea grime away with a warm cloth. He dried with a towel that smelled like gardenia and tobacco, like Peter, and set his palms on the vanity, studying his reflection. Rabbit-framed, small-chested, wide-hipped, and delicately masculine, Ethan Shaw wasn’t the optimal lightkeeper type, per se. He hadn’t a beard, only annoying stubble, and carried himself on dainty, soft-pawed feet. Much as the townsfolk whispered about lilies, they whispered about him too.

Witch—hissed like a match strike in the nave and murmured by joggers at the park—wasn’t entirely untrue, but Ethan still preferred friendlier terminology. Alchemist, maybe. Magician, even.

“Take the job, Ethan,” he mumbled and huffed at the mirror. “Surely the lifestyle suits you.”

A job doing, literally, anything else would’ve suited him better.

Ethan rolled his eyes. “I slipped,” he called, toeing the washroom door ajar.

Peter rounded the doorframe, square glasses crooked on his nose. Surprise shot to his face, but the expression faded, chased away by a frown. “You didn’t,” he warned, snaring Ethan’s reflection in a hard glare. “Ethan, we talked about this—”

“I don’t need your permission,” he snapped and slipped past Peter, striding confidently into the adjacent bedroom. He opened a drawer and fingered through his clothes, settling on a red sweater and corduroy trousers. “I’ve got the flowers; I know the ritual. Either have faith in me, or say I told you so if it doesn’t work, but hovering like a—” He batted at Peter’s broad chest. “—damn moth won’t change my mind. How was work?”

“Long,” Peter bit out. “Choppy water makes for terrible fishing, as you know. Even the local wildlife can’t handle the riptide—as you know—and consistently get thrown ashore, as you know, and—”

“You brought it home, not me.”

“I brought it home while it was still breathing,” Peter said, exasperated. He trailed Ethan into the closet, craning over him while he searched for wool socks—matching, preferably—and then into the kitchen, sighing dramatically at the waterlogged lilies. “Where’d you put the poor thing, anyway? Is it still in the garden shed?”

“No, I tossed it in the bathtub.” Ethan shot him an impatient glare. “Yes, of course, it’s in the garden shed, Peter. You think I’d let a selkie loose in our home? Give me some credit.”

“Okay, wait, hold on—wait.” Peter feebly attempted to catch him while he bounced around the kitchen.

Ethan yanked a bowl out of the cabinet, slid both knives behind his leather belt, unfastened the lavender from a rope above the sink, and stuffed his mortar and pestle underneath his arm. Before he could make for the door, two palms clasped his waist, turning him, and his beautiful, ridiculous husband wrinkled his nose. His copper cheeks were sea-bitten, angular bones pressing hard against his skin. As always, Peter Vásquez looked dashing, exhausted, and worried.

Ethan arched an eyebrow. After a strangled pause, he lifted onto his tiptoes. “You brought it home,” he whispered and pecked Peter on the lips.

“It’s a leopard seal, Ethan. Not a selkie,” he said patiently, as he would to a toddler. “And it’s dead because animals that get caught in bad weather sometimes die.”

Ethan patted his cheek. “Sure, yeah. So, the next time you’re caught in bad weather and someone plops you on my doorstep, I’ll cash in your life insurance and call it a day. How’s that sound?” 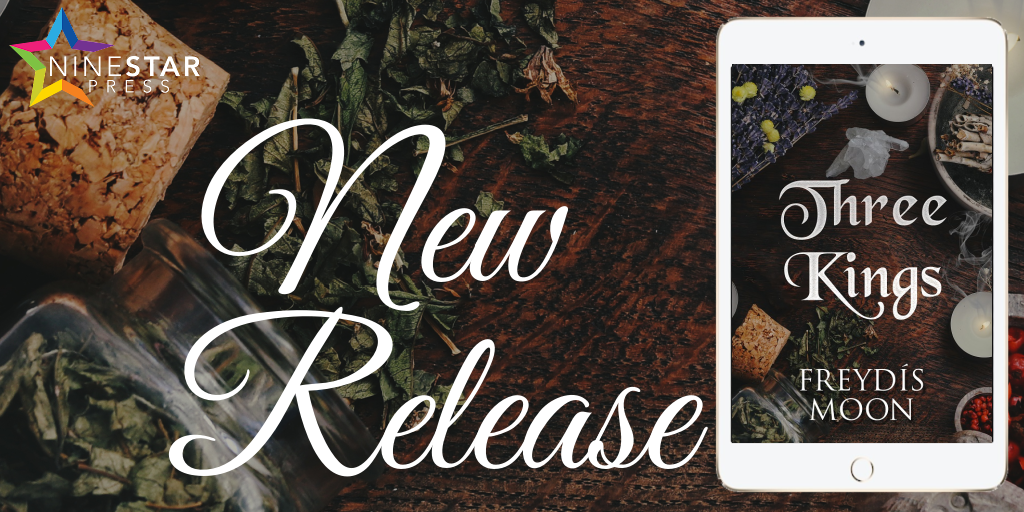 Freydís Moon (they/them) is a biracial nonbinary writer and diviner. When they aren’t writing or divining, Freydís is usually trying their hand at a recommended recipe, practicing a new language, or browsing their local bookstore.