This is a special Christmas story because it’s going on during the supernatural war.
The Unseelie and the evil wolf king, Calvin Wolfe, have been creating havoc among the wolves and their allies. In this story, it’s a forbidden romance and friends-to-lover story.
A dragon shifter has always had a crush on a wolf shifter. She’s been in love with them since they went to Legacy Academy, but he was a prince and she was a daughter of a traitor.
Supernaturals are only supposed to be with their own kind, and this is Christmas.
Christmas is a time for miracles when even a dragon’s dream can come true. 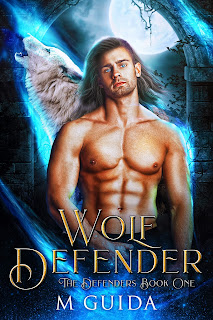 Wolf Defender
M Guida
Genre: Paranormal Romance
Publisher: Buffalo Mountain Press
Date of Publication:  11/10/21
ASIN:  B09DFDMQCY
Number of pages:  132
Word Count: 33000
Cover Artist: Jacqueline Sweet Design
Book Description:
I've been carrying a torch for a wolf defender, but he’s never looked my way. Why would he? I am a dragon and the daughter of an accused traitor.
When we get news of mystery and intrigue in the corrupt Timber Kingdom of the wolves, he wants to go there to avenge the death of his fated mate. I'm sure this is the key to proving my dad's innocence.
If I can convince him to band together we both might get what we want, including a chance at love. But neither of us know who to trust when demons and wolves have joined forces to bring the dark Unseelie to our realm.
Amazon

My heart was heavy with disappointment. I was no closer to finding my dad and proving that he wasn’t a traitor than I had been six months ago. Every lead had turned into a dead end, and based on some rumors I had heard, I had a feeling time was running out for him.

My sister and my mom had died several years ago. He was my only family and I missed him so much. Sometimes I couldn’t even breathe when I thought about it. This was one of those times.

Snow was falling in the Colorado Rocky Mountains and dusk had fallen early. Icicles were forming on the tips of my wings and the end of my tail. I was too tired and too miserable to keep going and landed in a small meadow. I dropped my bag in which I had packed a change of clothes, a journal, and my longbow and arrows.

It was too cold to shift back into human form, so I curled up into a ball and rested my head on my talons. Tears froze on my cheeks, but I didn’t care.

Damn Cormac, King of the Unseelie.

This was all his fault. He knew where my dad was, but stubbornly refused to tell me. After losing the battle against the Defenders and our allies, he said my dad was hidden somewhere that I could never find him–and so far, the bastard had been right.

I wasn’t sure where else to go. What else to do.

Exhaustion washed over my tired muscles and breaking heart. I closed my eyes and sighed, letting the quietness of the forest and the falling snow lull me to sleep…

About the Author:
M Guida has always loved fantasy and romance, especially dragons. Growing up, she devoured fantasy books and all kinds of young adult books. And then she found romance and a whole new world opened up to her.
Now as an adult, she fell in love with academy romance and has blended all of her past loves into one compelling series. Dragons, vampires, elves, demons, and shifters all attend Legacy Academy.
When she's not writing, she lives in the colorful Rocky Mountains with her fur baby, Raven, and enjoys taking her for walks.
https://authormguida.com
https://dl.bookfunnel.com/vtdntf5fxs
https://www.tiktok.com/@mguidaauthor
https://www.facebook.com/groups/MGuidasLegacyAcademy
https://www.facebook.com/profile.php?id=100064193882316 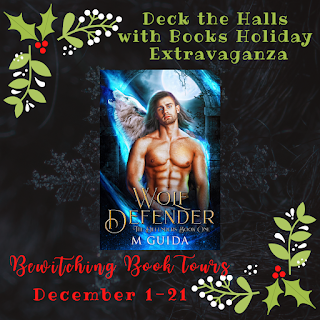 a Rafflecopter giveaway
at December 06, 2022