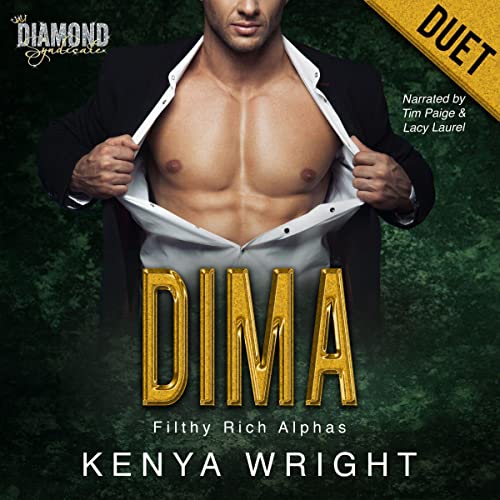 Filthy Rich Alphas is a series of stand-alone interracial romance stories featuring sexy men falling in love with kickass Black heroines. All books explore different tropes, have steamy illustrations, and will have you laughing as you listen.

Dima rules the North of Paradise—a city for the darkest alphas. The only gangster heaven on Earth. Due to his unique talent for capturing brutal enemies, he also heads the Diamond Syndicate with other Paradise Mafia Kings.

However, a serial killer has come to Paradise. And this sicko is targeting top Syndicate members. And Dima is having a challenging time finding the killer due to a sexy reporter constantly getting in his damn way.

Rose is a Pulitzer Prize-winning journalist. Last year, she created political earthquakes in New York from reporting on government corruption. Now that she’s moved to Paradise, her mission is to expose the Diamond Syndicate and all their wrongdoings.

Too bad Dima won’t let her.

But most of the time she submits.

Momma Says: 3 stars⭐⭐⭐
I've been stepping outside the box a lot lately, and Dima is one more on that list. I don't read much mafia romance - mostly because it too often leads to selling someone or kidnapping someone, which leads to Stockholm syndrome. Dima doesn't have either, at least where the romance is concerned. and I do love me some enemies-to-lovers romance as well as romantic suspense. I didn't really feel the enemies-to-lovers vibe between Dima and Rose. They do have some fun banter, but it's more that they should be enemies than that they actually were. There is good chemistry between them, and it's easy enough to root for them. The suspense part of this one is intense, which is just the way I like it. I would've preferred getting to guess about the killer a little longer, but one of the clues is just a bit too obvious. That said, it's not a dealbreaker for me by any means. What I enjoyed most about this one was Dima. Having one of my own that shares a particular trait with Dima, I probably laughed a little too hard at some things, but I couldn't help it. So many things were spot on, and Kenya Wright either researched thoroughly or has personal experience. I realize I'm being vague, but I'm trying to steer clear of spoilers. Narrator Tim Paige did a good job with Dima, and his timing and tone were spot on. I didn't feel as much connection with Rose, and I think that had a lot to do with the narration. I usually really like duet narration, but Lacy Laurel just isn't my cup of tea. It's not that she stresses the wrong words but that she stresses almost all the words, and it quickly becomes distracting. So, in the end, this one may not have been exactly my kind of read, but the author has a great eye for detail, and I would read other books by her.