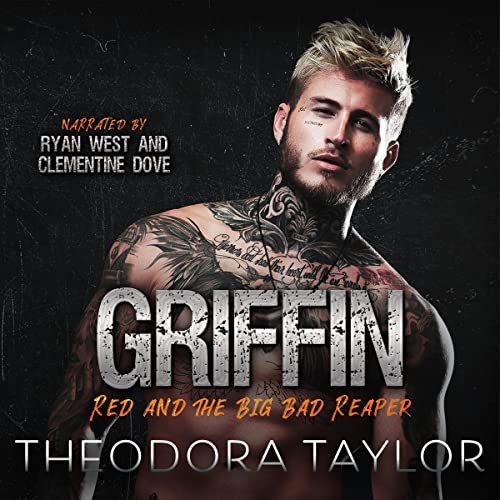 You crossed me. You kept this secret from me. Now you'll have to pay. (Griffin F**kin Latham).

Red: Five years ago, I was as boring as boring could be. Seriously, my name is Bernice. But then came that one month when I pretended to be somebody else entirely while working at a roadhouse biker bar. Big mistake. Huge. Who knew one month pretending to be an interesting bad girl could ruin a boring good girl's life?

Griffin: When I saw her, I knew she'd be mine. My old biker crew told me she was untouchable—that I'd never be able to land her without my fame and last name. So I did what any rock star with a big, ahem, ego would under the circumstances—wagered five figures on me seducing the untouchable girl behind the bar.

Red: When the insanely hot biker, who wouldn't have looked at Boring Bernice twice, asks me to come back to his place, I decide, “why not?” It was just supposed to be a silly fling.

Griffin: It was just supposed to be a stupid bet. But what started out as fake got plenty real—especially after I lost her. Five years. I spent five years searching for her. And when I find her.

Red: Five years. I managed to hide from him for over five years. He's powerful and dangerous, and I'm not sure what he'll do if he discovers the secret I've been keeping from him for five years and nine months. So when he finds me, what's this story called again?

Escaping the Ruthless Biker: No, that's not the title, baby. The story is called Red. Red and the Big Bad Reaper. And you're about to find out why.

Momma Says: 4 stars⭐⭐⭐⭐
I don't read, or in this case, listen to, a lot of biker romances, but this one isn't the typical biker romance. Oh, it has its share of darkness, and there are some rough and rowdy characters here who have no qualms about crossing lines most of us would never dream of. Then there's Griffin, who is a bit of a contradiction. He has a ruthless side, but he's also sweet and protective, and he has a softer side that's just as sexy as the arrogant biker who can have any girl he wants. And Red? There's just something so tempting about Red's choices. I mean, who wouldn't want to step outside the box they live in and be bold and daring, even if it's just for a little while? We also get to catch up with some past favorites in Theodora Taylor's world. I like the way she handled that - she gives enough explanation, so you aren't lost if you're new to the characters, but it's not so much that it bogs down the story for those familiar with the past stories. Ryan West and Clementine Dove give voice to the characters, and they give a top-notch performance. I've had the pleasure of listening to Clementine Dove before, and she always delivers. She brings the characters to life, and in this case, she gives us all the sass I would expect from Red. Ryan West was new to me, but I'm definitely going to be looking for more of him. That voice is exactly what I wanted from Griffin, and whether he's being cold and calculating or sexy as sin, Ryan West brings it. To sum it up, we have a gritty romance excellently performed. The more I read or listen to Theodora Taylor's work, the more I want. It's so easy to fall into her writing and get lost in the world she's created.