I just finished reading the first book in the Hot Off the Ice series by A. E. Wasp, City Boy, and what a sweet tale it is!

Written in third person POV, City Boy is told from the perspectives of our two main characters, Bryce and Dakota. It is a May/December Gay Romance, as well as a Sports Romance with Bryce being a hockey player. There's not a lot of game talk, but enough so that the Sports Romance genre works. This one is also quite steamy, so I'd certainly recommend 18+. 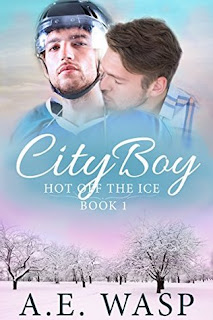 Blurb: Follow the money or follow your heart? Either way, you lose.
When a blown tire leads directly to mind-blowing sex with a white knight named Dakota, pro-hockey player Bryce Lowery discovers he is most definitely gay.
Being with Dakota opens up a whole new world. Bryce can’t imagine life without him. But he refuses to be Bryce's dirty little secret. If he wants to keep Dakota, he’s either going to have to come out publicly or retire and walk away from millions of dollars.
Bryce Lowery feels like the answer to all of Dakota’s prayers. But is Dakota willing to leave the only life he’s ever known only to be thrust into the spotlight as the boyfriend of the first out gay hockey player? Would their relationship even survive it?
He’ll lose Bryce if doesn’t because Bryce will leave eventually. No one would turn down millions of dollars for a nobody with nothing.

I love a good May/December romance and this one certainly fits the bill. It does have a bit of a twist with Bryce, the December part of this pair, being almost innocent in what he knows about matters of the heart and figuring out who and what he wants. Dakota has his own issues, but his revolve more around family and learning to trust.

With some witty and often humorous dialogue, along with some silly situations with Bryce's family, these two embark of a journey of discovery, along with lots of steam as Bryce and Dakota explore their feelings of lust and love. City Boy is not just a romance, it's a story of self-discovery, learning to trust, family, and finding that special someone to share your dreams with.

Overall, it's a good, solid start to a series and I can't wait to see what's next.

City Boy is available on Amazon and is listed in Kindle Unlimited.

Thanks for joining me! My next read is another romance - lots of squishy feelings going on here!