Who is Rich? by Matthew Klam

So, my plan was to read a murder mystery, but my copy had some technical issues, or maybe I had some technical issues😕, could be either one. Anyway, until I get a readable copy downloaded, I decided to try to finish up one I have been reading off and on for several days now. I did finally finish Matthew Klam's Who is Rich?, but it took a bit longer than I had hoped.

Who is Rich? is very well written in first person POV and Klam's storytelling is often quite compelling. The book is listed as General Fiction and fits well into that genre and it is considered a Satire. However, I've typically found Satire's to be quite humorous and I found little in the way of humor in this one. There are illustrations throughout, which is nice touch, considering the career of the main character. 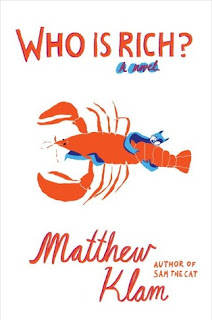 As I said, Klam's writing is compelling, but his character in Who is Rich? is not. In the beginning of this story, I found a character who is unhappy with his life and seriously whiny. I pushed through, hoping that his life would improve, but found only more whining and complaining.

Rich is a graphic novelist whose only book is now out of print. He seems quite unwilling to accept the fact that his small piece of fame may be over and he's broke and unhappy with his life. Instead of trying to do something to improve his situation, he's petulant, jealous of other's success, petty, self-absorbed, judgmental, indecisive, and when he does manage to make a decision, it's usually the wrong one, which cycles right back to being petulant and miserable.

While I don't agree with infidelity, it happens and I can read about it without being offended. However, in Rich's case, he waffles back and forth so often between his wife and mistress that I ended up not caring which way he went. In all honesty, I found both his wife and mistress to be as sad and unlikable as Rich, himself.

In the end, the incessant complaining and pathetic inner dialogue of Rich became so tedious that I really didn't care who Rich is and just wanted to finish the dang book, which left me a bit melancholy in the end.

Considering the author's writing style, I would consider reading another book by him, but this one just wasn't for me. So, that's just my 2¢ worth, so take it for what it's worth. 😏

Who is Rich? releases on July 4th and is currently available for pre-order at the following links.

Thanks for joining me! Now on to something happy (I hope!)