I've read several MPreg romances and the latest one, The Omega's Dearest Baby by Louise Bourgeois, is quite a bit different than any that I've read before. 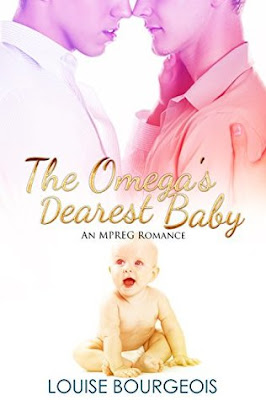 Noah is an Omega who wanted to do right by his long-time girlfriend. Yet he's wooed by the charms of his best friend Vincent, a gorgeous man, talented artist— and an irresistible Alpha.
When the Alpha and Omega pair return from a vacation in the tropics, Noah’s body begins to change, which leads to a discovery that turns his entire world upside down in a beautiful way.
Pregnant with Vincent’s child, Noah is determined to make their relationship work if only for the sake of their baby daughter. He finds himself falling even deeper in love with the father of his child. But this new family is nearly snuffed when Noah finds Vincent unconscious and is thrust into the most challenging time of his life.

The Omega's Dearest Baby is available on Amazon and is listed in Kindle Unlimited.

This story threw me a bit and the blurb was very misleading. Maybe I missed something, but the whole Alpha/Omega story line was nonexistent. I suppose Vincent could be thought of as an alpha male, and he does take care of Noah, but nowhere is it mentioned that they are alpha and omega. In fact, omega or not has nothing to do with Noah being pregnant. It is medically explained, pretty far-fetched, but still explained, in detail, with some sci-fi medical reasoning.
I did have an issue with Noah's cheating. Not because he cheated. It's fiction, after all, and cheating does happen. My issue was the fact that he had no problem with it until Kaycie found out and left him. Then he feels guilty. And that's another thing, Kaycie isn't exactly floored at the fact that Noah's pregnant, but the fact that he cheated! In fact, everyone in this story, with the exception of Noah in the very beginning, completely accepts this scenario with little surprise. Maybe in the world the author has created, this is commonplace, but we aren't told that.
Then, we have the "romance" between Vincent and Noah. We're told several times that Vincent has feelings for Noah, but Noah resists even speaking of feelings until he almost loses what he has. The pair is attracted to each other, but I found little in the way of romance and by the time that Noah realizes how he really feels, I found it hard to care.Honestly, I found Cedric, a secondary character and friend of the couple, to be the most interesting character in the story.
The book is lengthy, but jumps time so frequently that it felt like things were missing. We get tons of details about some things, but just snippets of others, making for a rather confusing story that, for me, was more science fiction than romance.
Overall, the story left quite a bit to be desired and in my humble opinion, the lovely cover is the best of it.


** Read and review copy provided by Shifted Sheets and the author