Margo Ryerkerk has recently released the first book in her Ardere Series, Fluidus Rising, and it's everything a great Urban Fantasy should be. 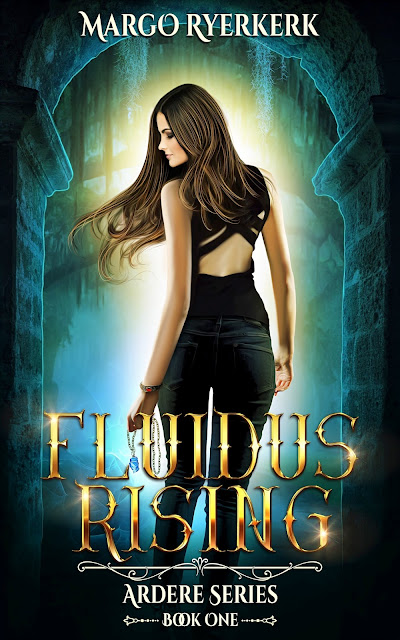 Magic. Romance. And a fight to the death.

Torn away from her high school graduation, Sierra Reeves discovers that everything she thought she knew is a lie.
In a flash, she’s no longer a normal girl preparing for college, but a Fluidus—a rare supernatural with telekinetic powers. Her new abilities attract the attention of both the Ardere regency and the Culpatus, a group that wants to overthrow the supernatural government. Fearful for Sierra’s future, her grandmother decides to leave their home state Vermont and hide out in Savannah, Georgia.
In Savannah, Sierra forms an alliance with the overprotective and handsome Ardere marshal Gavin McLoughlin. With his help, she slowly accepts her new powers and that she’s a part of the supernatural community.
Just when Sierra begins to settle into her new life, her world is rocked again. In addition to the Culpatus discovering her location, a serial killer is on the loose in Savannah.
Fighting to control her developing power, and facing danger on multiple fronts, Sierra will have to use all her resources to stay alive.

I don't read a lot of young adult books, but I do love Urban Fantasy. There's just something about the idea of magical beings walking among us mere humans that fires up the imagination.
Fluidus Rising is everything a great Urban Fantasy tale should be. It starts with just a taste of the magic and suspense to come and builds from there with a rising tension that keeps the pages turning. The story revolves around Sierra, who is quite special in the supernatural world. She's forced to learn about the Ardere world while being uprooted from her life, learning who she can trust, and trying to stay alive and safe. In addition to Sierra's struggles, we also have a murderer on the loose in Savannah, and while I did figure out who the killer was, it didn't take away from the excitement of the story for me. In fact, it added an extra bit of tension in the suspense of who would be next.
This first book in the Ardere series does a wonderful job of building the author's world of supernaturals and while it doesn't end with an earth-shattering cliffhanger, there are some unanswered questions, and the conclusion sets us up for the next addition in a promising series.