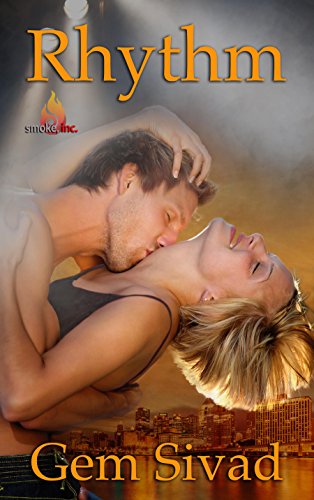 When CEO, Marty Jones, needs a partner for a charity dance-a-thon, he hires a Marilyn Monroe look-alike from Maxine's Baby Doll Escort Service. All he hopes for is a warm body who can shuffle her feet.
Underneath all her quirks, serial job-hopper, Holly Smith is a tough, no nonsense, kind of woman. She doesn't date, has two friends, and concentrates most of her time and energy on restoring the old house she bought at auction.But boy, can she shuffle her feet--dancing. When her best friend asks her for help, she agrees to play partner to a local CEO at a charity dance-a-thon.


What could go wrong?

Wow, just wow! This third Smoke, Inc tale is packed full of everything that I've enjoyed in the previous books, plus so much more. More funny, more steam, more emotion… More everything. Marty and Holly's story is perfectly titled, considering their meeting on the dance floor and Marty's subsequent efforts to find a Rhythm in the relationship. I did have a bit of an eye-roll moment with their first encounter, mostly due to Holly's circumstances, but their chemistry is undeniable and this pair is nothing short of scorching hot together. Holly is a bit of a loner and doesn't share many personal details with anyone, which leads to an amusing misunderstanding of who she is and some rather inappropriate comments from Marty. As he slowly inserts himself into Holly's life, the quirky bunch of Smoke, Inc begins to pull her into their world whether she likes it or not, and some of them are hilariously pushy about it. Finally, we get to the suspense in this entertaining read. It's not a right in your face, here's a mystery type of thing. Instead, it sort of trickles into the story, sometimes in ways that seem completely innocuous until it all comes together. I'll admit that some of those little moments didn't appear to have much to do with the story at first and I did wonder why they were even included in the story, but it does all make sense in the end and makes for an interesting bit of suspense without getting overly angsty. To sum it up, RHYTHM is an engaging read with some absolutely lovable characters and loads of laughs, plus a splash of danger. I've thoroughly enjoyed all the characters in the Smoke, Incstories, but Marty and Holly's romance is hands down, my favorite.

❃❃As posted at The Romance Reviews

Email ThisBlogThis!Share to TwitterShare to FacebookShare to Pinterest
Labels: Reviews, The Romance Reviews