Come Back
The District Line #3
by C F White 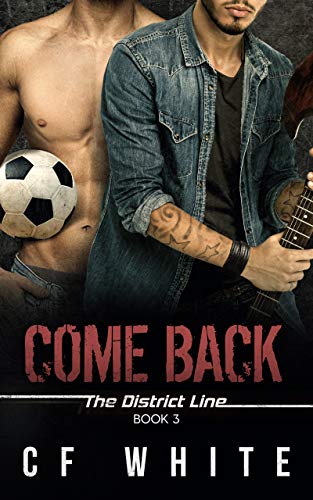 The bigger you become, the harder you fall. Sebastian Saunders is a rising rock star. Jay Ruttman is a Premier League football player. Their year-long relationship is hot commodity. Hounded by the press and fans alike, the lovers struggle to keep their private lives private. Flying high in the charts and having Jay by his side, Seb is finally living his dream. But Jay’s new, promising career is threatened when a horrific injury on the pitch has him side lined—not only in the game but also in his relationship with Seb. Jay’s crippling self-destruction spirals out of control, tearing them apart. To move forward, both men must learn to leave their past behind—not so easy when it keeps coming back to haunt them. Can their hard-fought relationship survive the ultimate test?This is the concluding part to the District Line series where the full-time whistle could signal an end to their turbulent journey… or is it just the beginning?

Come Back brings the District Line series to a close. If you're familiar with the series, it follows the romance between Jay and Seb, and what a whirlwind it has been. This pair has certainly had their ups and downs, but they're both so darn lovable, faults and all, that I couldn't help but root for them. Those ups and downs continue with this one, and these two face more than their fair share of angst. The only real drawback for me is that I felt like the story was a bit too drawn out at times. Even so, by this point, I've become invested in this couple and had to see how things would play out for them. Some things I saw coming, and some I didn't, but my takeaway was that I still love Jay and Seb together, and I'm glad I got to know them. I loved their growth throughout this series, both as a couple and individually. Like the first two books in the series, this one is well-written, emotional, and filled with chemistry, both in and out of the bedroom. All in all, a solid conclusion to the series.