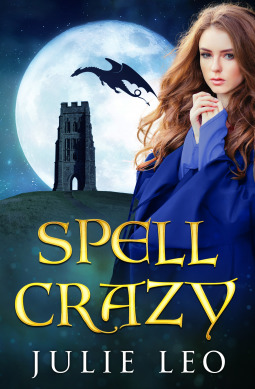 As scion of an old witching family, far more magical achievements are expected of Athena Gwyvern than she's managed so far in her moon priestess training at Avalon Institute in Glastonbury, England. She's failing, but if she falls in love her powers will grow strong.

When she botches a love spell and unleashes demons in Avalon, it puts the whole village in danger. The school magistra, Viviane, suspects Athena’s behind the turmoil and plans to prove it.
With help from friends Laurel and Sean, demon hunter Tak, and a dragon called Moksha who also slipped in, Athena must round up the demons and cast them back through the portal. Can she do it before they drive Avalon and the village to ruin, and worse, Viviane expels her?

The saying 'You can't judge a book by its cover' comes to mind with Spell Crazy. With such an eye-catching cover and an interesting blurb, I had high hopes for this book. Unfortunately, it doesn't live up to those expectations. It all starts with a love spell that goes sideways. When I say it starts there, I'm speaking literally - that's where it starts, and if it sounds like we're thrown into the middle of a story, that's what it feels like. From there, it's a lot of characters in need of development beyond their libido, rather simplistic dialogue, and a scattered storyline. For me, the most interesting character was the dragon, but that just wasn't enough to save this one. To be honest, I finally gave up and started skimming in hopes of finding something to catch and hold my attention, but the whole thing just fell flat for me, and I can't say that I'd recommend this one.

❃❃ARC provided by NetGalley and BooksGoSocial