Electric Soul
The Rise Up Series Book 3
by Taylor Saracen 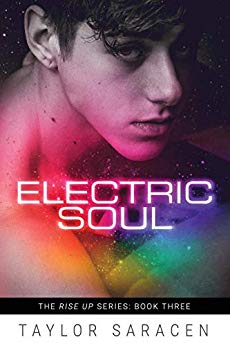 Joey Mills doesn’t know who he wants to be. He isn’t even sure who he doesn’t. All he knows is that he thinks about it less than other people who try to mold themselves into certain boxes they are convinced they need to fit into. He always fit in just by being himself. Or maybe that is what he trains his brain to believe, that he is who he wants to be, and that people want to be around whoever he is. Thinking about it too much is a dangerous exercise in self-doubt, one he doesn’t have the patience to participate in. Why doesn’t he tell people he is gay? Why is it off-limits if he truly doesn’t worry about what people think of him? Maybe it’s time for a change.
Rise Up is a series of new adult novels that illuminates pivotal moments in the lives of LGBTQ youth. Each novel features a fresh protagonist and his experience navigating the ups and downs of adulthood. While the characters change and the stories vary, common themes--including the struggle for independence, identifying one's passions, searching for acceptance and for love--are interwoven through the pages of the novels. These stories will open your eyes to worlds of possibilities, both conventional and off-beat, as these men take you on their journeys to self-discovery.

Electric Soul is a bit out of my wheelhouse with its young adult themes and teenage angst, but once I started reading, I didn't want to put it down. Between the writing style, which is quite good, and the interesting characters, there's something thoroughly compelling about this story. Joey does a lot of growing up in this coming of age tale as he faces a lot of the same problems that are so prevalent today. This character was somewhat of a contradiction for me. He goes through life with a devil may care attitude that lands him in plenty of trouble, but there's also a charm and intelligent wit about him that had me on his side and hoping for the best. So, the parent in me wanted to lock him in his room to keep him out of trouble, but the part that remembers those teenage years wanted to see him spread his wings and find the man he's meant to be. Whatever the reason, I was completely caught up in Joey and those around him. So much so that I found myself reading into the wee hours of the night without even realizing how much time had passed.