The Second Life of Eddie Coyne
by Louis K Lowy 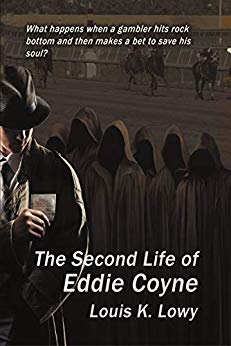 Eddie Coyne loves playing the horses. Loves it so much it's ruining his relationship with his wife and six-year-old son. In a last ditch effort to prove he's not a loser in their eyes, Eddie places a seemingly impossible bet on a long shot and hits pay dirt.But before he can cash in and make amends with his family, he's thrown down an escalator and left for dead by a greedy hoodlum looking to cash in on Eddie's winnings. Dying, Eddie wakes up in the presence of the Jesses, a monolithic group of six whose job it is to decide who enters heaven and who enters hell. The Jesses tell Eddie he's stuck in the middle—not good enough for heaven, not bad enough for hell. They entice him to go in on one final bet to break the dead heat. If he triumphs, they stamp his ticket to paradise. If he loses, he spends eternity in the netherworld. The bet? Eddie must prevent someone chosen by the Jesses from taking their own life. Thinking it will be a piece of cake, Eddie agrees. He quickly learns the Jesses are more cunning than he'd imagined.

The Second Life of Eddie Coyne is an Urban Fantasy set in modern day but touching on historical fiction throughout the book. From the moment I read the blurb, I expected something a little different than the norm for UF, and I certainly found it. The story isn't necessarily new at its core, but the way Lowy does it is like nothing I've ever read in the genre. The characters are developed and most are relatable. Eddie is in a mess of his own making, but even though I knew that, I still wanted everything to work out for him. And the Jesses! I love the way the author wrote these characters. There were parts of Eddie's journey to win his bet with the Jesses that I liked better than others, but that just comes down to personal preference. More than a journey to win a bet, this story is a journey of redemption and learning what is truly important in life, what makes a life worth living. A must read!

❃❃Reader copy provided by the author

Bewitched by a Vampire Cover Reveal