Unveiled
Book Two of The Unbreakable Series
by Zelly Jordan 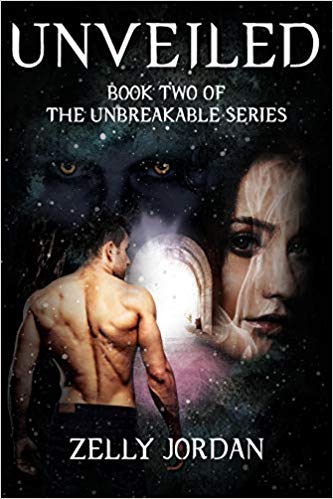 Sergeant Kellan O'Ryan.Soldier. Assassin. Beast.Working covert ops as ordered. Living a black and white existence.Until everything shattered into grey and nothing made sense anymore.An anomaly on the species scale, Kellan's world was one of cold precision and stoic duty. A world he believed to be his own but when the beautiful Detective Charlotte Alistair stormed into his life, it shook the foundations of all that he was and believed himself to be. Initially wary of her, Kellan soon found himself ensnared in a way he didn't think was possible. She enthralled him, captivated his every sense, human and animal alike. She revealed pieces of himself he didn't know existed and a life he had forgotten.But how? What happened to him?At first, amnesia seemed to be the only explanation but as he began tounravel the truth it soon became clear that nothing was as it seemed.The more he learned, the less he knew.And with nothing but his gut instinct to guide him, he needed to keep his focus sharp and clear even as his feelings for the beguiling cop began to dominate his every moment. With Charlotte and his alleged best friend, Finn McGregor now crowding his once solitary existence, the danger threatening him came not only from unseen enemies but from within. Because the more he opened his heart, the more he risked.Would the connection he felt with Charlotte be the strength he needed to survive the upheaval or would it be his weakness?

I devoured Unveiled. Seriously, I could not put this book down. And, I had all kinds of great things to say about it until I realized that almost all of those things would give spoilers! So, I'm going to try to keep this as spoiler free as I can while still conveying just how good it is.
I was quite impressed with book one in this series, and I was actually a little worried about this one, given that Zelly Jordan had set the bar quite high with her debut. My worries turned out to be unfounded because she's gone and done it again. The story is captivating, the characters are unique, and the romance is hot. Most of the world building was done in book one, but it does continue here, and I love that it's done organically within the story rather than large sections of information all at once.
The characters are all well-developed, but the star of this show is Kellan. Ah, Kellan. Our leading man is a big ol' bag of alpha male and everything that comes with that. Plus he's broken and searching for answers. The emotions run the gamut with this guy - my emotions, that is. I loved him, I hated him, my heart broke for him, I wanted to shake him until his teeth rattled, and I loved him again - sometimes all on the same page. Then there's Charlotte, who actually got to express all those emotions on the page, and the chemistry between these two is off the charts. I'm pretty sure if you look up angry sex in the dictionary, you'll find a picture of Charlotte and Kellan, and Jordan does an excellent job of showing all the emotion between this pair.
Unveiled does give us some answers and we don't have a jaw-dropping cliffy like book one, but there are still questions and things are far from settled. This second book in The Unbreakable series is full of action, suspense, and romance, not the sunshine and roses romance, but there is a love story here. And it's quite witty, which is a big plus for me. I love that Jordan injects some terrific wit while still maintaining that atmosphere of tension. To sum it up, this is a fantastic addition to an already fantastic story, and I can't wait to see what's next for these characters.