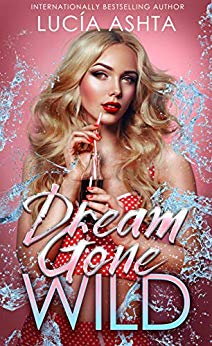 Jace Rollini was my first kiss, my first boyfriend, my first everything.Gorgeous and tough, he was my high school’s bad boy.A motorcycle lover with a craving for danger, I thought I’d hold on to him as long as he let me.Fast forward twelve years…I ended up with a man who was the wrong sort of trouble.The kind that hurt me.The kind that left me in the hospital with a traumatic brain injury that erased the last twelve years of my life.Now I’m back in the small town I ran away from.And Jace is here.And he’s sexier than ever.I broke his heart.He’s right in not wanting anything to do with me.I shouldn’t want Jace anymore.I should definitely stay away from him...** Dream Gone Wild is a full-length, small town, second chance romance with a happily ever after. Each book in the Seize Your Wild series can be read as a standalone, but is best read in order.

Dream Gone Wild wasn't exactly what I expected. The blurb hints at a more emotional story while the cover makes me think the story would be a lighthearted romp. Emotion won out on this one, at least in part. There is nothing lighthearted about Rae's circumstances. Nevertheless, there are some lighter moments, and once the romance between Jace and Rae gets going, or in their case, gets going again, things heat up. The chemistry between them is good, and they certainly generate a fair amount of steam. But - yes, there is a but - I still had some problems with this story. Like why Rae broke Jace's heart in the first place. Why such a big turnaround in her character? I thought maybe it would get into at least some of that, and I assumed that Todd had something to do with the change, but I kind of felt like I was left hanging on some of the answers. I think what bothered me the most is that Jace and Rae never really got into all of that. They talked, and I get that Rae couldn't remember the breakup, but I expected them to get into the details. If for no other reason than to give them both some closure on the subject. Instead, there's a lot of I love you, but I can't love you. I want you, but we can't do that, I want to marry you, which is why I won't marry you... Umm, what? It was kind of whiplash-inducing. Don't get me wrong - I realize that I sound completely critical, but I did like this couple, and I liked their story. I just wanted and expected more. It felt like things came together a little too easily after everything that happened. In the end, I would say that the story was worth reading, and I would read other books by this author.