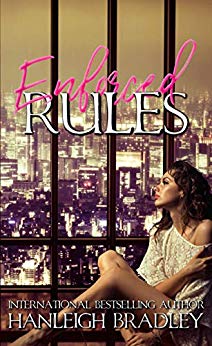 Aurora makes me want to break every rule I've ever made. She threatens to steal my control.
Enforced Rules is the second book in Bestselling Author Hanleigh Bradley's debut series.
She's under his skin, in his mind and pushing her way into his heart. She sees more than he wants her to.
Landon doesn't do vulnerable. He doesn't do weak. And that's exactly what she makes him. She's got him completely at her mercy.
Landon's world is unravelling fast and with control out of his reach, he might just push to enforce his rules in a desperate attempt to reclaim the control he craves. He told Aurora he would help her break her rules but he hadn't planned on it being at the expense of his own.
But will his need for control prove too much for Aurora, a young woman trying to break free.
Can this British bad boy and pretty English socialite balance their need for control or will their relationship fail before it even really begins?
Enforced Rules is the second book in a four book complete series.
A one night stand with CEO bad boy and all round "manwhore" Landon Peters will change Aurora's life, if she'll take a risk and break some rules.

Enforced Rules picks up where Broken Rules left off, but it didn't go quite as I expected. Landon and Aurora had an intense attraction in the first book, and it had the feel of two people who could certainly fall in love. The intensity is still there in this one, and it's almost palpable, but I'm not sure that I'm all in on the love thing. They're moving really fast, especially for Landon to have been so hesitant. It almost has the feel of an obsession with him. Nevertheless, there's no denying the chemistry this pair has, and they are an easy couple to root for. The writing is good, but the story does get overly repetitive. Chapters alternate back and forth between Aurora and Landon, which isn't a problem, but the beginning of each chapter is basically a repeat of the last one. It's nice to get both viewpoints of the things happening in the story, but I'm not a fan of the almost verbatim recaps. In the end, I do still like these characters, and with another open-ended conclusion, I'll be interested to see where they go from here.