As Above, So Below Tour and Giveaway 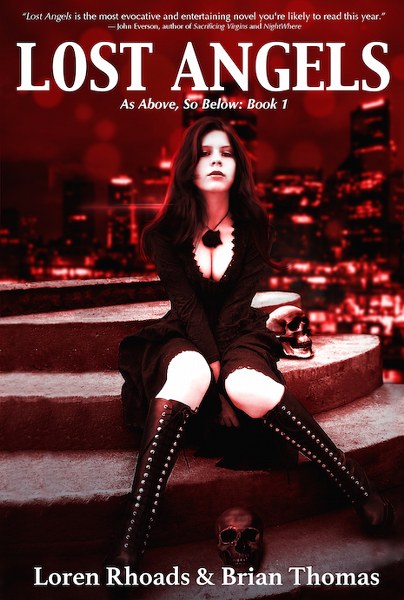 Lost Angels
As Above, So Below Book 1
by Loren Rhoads and Brian Thomas
Genre: Paranormal Romance

When the succubus Lorelei sees Azaziel across Lost Angels, she knows he’s been kicked out of Heaven, but is not yet Fallen. She resolves to do whatever it takes to bring the angel down.

Unfortunately, Lorelei doesn’t realize that Azaziel has an agenda of his own. Taking her back to a burned-out church, he forces a mortal girl’s soul into the devil girl’s flesh. Then the succubus needs to find an exorcist who can cast the ghost out of her.

With all the supernatural warriors of Los Angeles looking on, neither the angel nor the succubus can imagine how love will derail their plans… 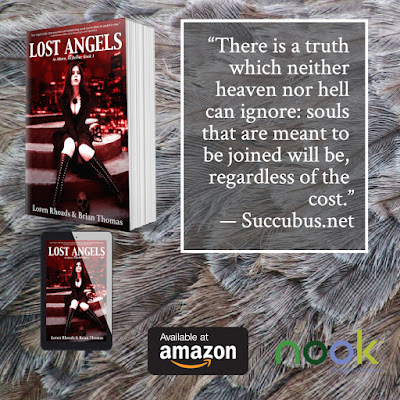 Aza tugged a handful of keys from his coat pocket and unlocked a rolling metal door. Lorelei was curious to see an angel’s lair. Perhaps he’d insisted she take mortal form for her own protection, to allow her to enter: possible, though doubtful. He’d accepted her company, but took no responsibility for her. Yet.

She followed him into the warehouse. When he rolled the door closed behind them, darkness crowded the building. She took a step simply to hear her heel ring against the cement. Long, narrow, the echoes said.

The angel grasped her elbow. She leaned against him for safety’s sake. He didn’t push her away. The building seemed to hold its breath.

Several paces in, he unlocked another door and eased her across the threshold.

With a rush of wind, a legion of candles burst into light. They clustered in knots on every flat surface. Creamy golden beeswax had pooled around their bases.

On the eastern wall, he’d built a shrine. Shards of mirror formed a starburst. A small casket hid his ritual implements from her gaze. Traces of myrrh lingered in the air.

In the corner lay a single futon on a frame made of loading pallets. The bed had neither sheets nor pillow, but a couple of blankets spilled over its foot. She wondered why he wasn’t living in one of the better hotels downtown. The Biltmore was reputed to have several angels in residence, since its façade was inscribed with their names and images. What was Aza’s story that he didn’t rate a room there?

“Make yourself at home.”

As the angel shrugged off his coat, Lorelei stole a glance, but saw no wings. Pity. It would have made a nice bit of show. She stepped out of her shoes and perched on the edge of the futon to rub her feet.

Aza hung his coat on a simple wire hanger behind the door. Beneath the coat, he wore a clean white button-down shirt, worn chinos, and boots that needed a shine. Did he always dress like Nondescript Man, or had he spiffed up to go out tonight?

Ignoring her, the angel knelt before his shrine, resting his hands on the casket.

Lorelei stretched out on the futon, feeling chilled, and pulled the blanket over her.

The angel got himself right with his Maker and came to lie beside her, also fully clothed. He didn’t share the blanket.

“Hold your hands out,” he answered.

She pushed them out from under the covers, expecting him to rub them warm. Instead, he caught her wrists. In an unexpectedly swift movement, the angel swung his weight over her, pinning her beneath him, entangled in her shroud. As she struggled to claw at him, he snapped a metal cuff around one wrist. He dragged her toward the head of the futon, wound the handcuffs around a bare pipe there, and cuffed her other arm.

As she tested the strength of the handcuffs, the pipe, and her flesh, he draped the blanket over her. He stretched his legs out along hers, then laid his arm across her midriff.

Cursing him, she did. 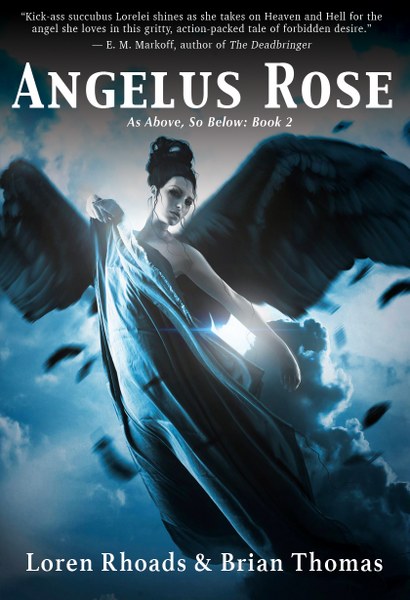 Angelus Rose
As Above, So Below Book 2

If Romeo had wings and Juliet a barbed tail, could they find happiness in the City of Angels?

After their escape from the ashes of Lost Angels, the succubus Lorelei and the angel Azaziel want nothing more than to enjoy each other's company. Unfortunately, Asmodeus, the Demon Prince of LA, has threatened to devour Lorelei's new-grown soul if she doesn't bring about Azaziel's downfall. Meanwhile, Aza is keeping secrets of his own that threaten the tenuous peace between Heaven and Hell.

Three archangels come to town to try to set things right, but friendships are fracturing. The demon in charge of fallen angels is sniffing around. And Los Angeles is about to be caught between a devil and the deep blue sea. 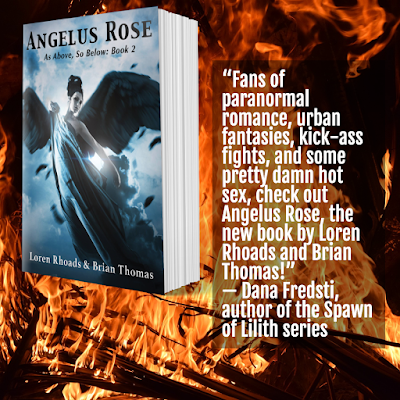 Outside the church, the night lit up with the sound of singing. A lone male sang a quiet lullaby. Lorelei froze, riveted by the maddeningly familiar voice. Then a slow smile crept across her face. Azaziel. Right on cue. Lorelei wondered what little honey her angel was crooning to now.

Desperate to distract her, the priest asked quickly, “Call you about Yasmina? That’s your whole message?”

Lorelei stalked toward the window. Joseph wrestled out of the bedclothes behind her, but hesitated before his hand closed on her arm. Lorelei could feel his heat at her back, his breath on her hair, but ignored him. What didn’t Joseph want her to see?

She peered cautiously around the window frame. Outside, a winged angel stood in the center of the fenced playground: without a doubt, her Azaziel, clad in a pair of 501s and a button-down blue chambray shirt. Above and around him like traces of a molecule’s orbit, swirled the souls of children. A multitude of souls, she saw, hundreds. Lorelei cataloged them instantly: none of them saved, many of them swinging toward the light, a few of them still shadowy with unshed mortal grievances.

Aza offered his lullaby to the souls of unsaved children.

Lorelei struggled to wrap her mind around what she saw. Her angel hoarded souls, children’s souls: to what purpose? Demons collected the damned and sent them on their way; angels scooped up the saved. Devils consumed the remainder, removing them from the wheel of life. Very few mortal souls—those who had withdrawn from the eternal battle—had the determination to stick around as ghosts. What were these children doing here?

Behind her, Joseph dropped his bible on the floor. The noise resounded in the little room, magnified far louder than the action justified. Outside, the angel immediately stopped singing and manifested his sword and armor.

Lorelei worked up a vicious grin. “I’m here to see Aza,” she reminded.

“I’ve been ordered to work my way around to his friends.”

Before the priest could answer, she stepped up onto the window ledge and sprang out.

Aza’s face lit up, thrilled once again to see her. His armor evaporated.

But Lorelei was too angry to fully appreciate his welcome. No wonder the angel had come to her exorcism with a Childbed Angel. Lorelei wondered how many of the other sixty-nine guardian angels had come to LA to protect Aza’s ill-gotten flock.

Like a cat scattering pigeons, Lorelei’s appearance shattered the precise geometry of the children’s adoration of the angel. Their souls shrieked and fled the devil. She noted that they seemed trapped within the confines of the chain-link fence.

Lorelei reached out for a young man—Erik, all gothic doom and gloom—and trailed her talons through his soul. She found lust there, drooling admiration for the devilish charms straining her yankable black dress. That one she caught in the reflection of the buckle of her purse.

Aza put his sword away. He jumped upward, opening his wings as he leapt toward her. “Come away from here,” he ordered.

“We’d better go somewhere we can talk,” Lorelei answered. “You have some explaining to do.” 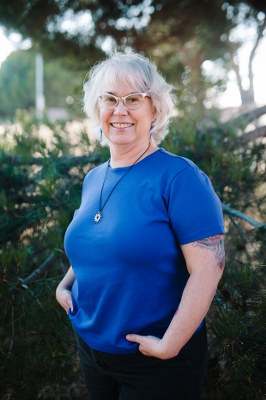 Loren Rhoads is the co-author (with Brian Thomas) of the novel Lost Angels about a succubus who sets her sights on an angel and ends up possessed by a mortal girl's soul. The sequel, Angelus Rose, came out in February 2020.

Loren is the author of The Dangerous Type, Kill By Numbers, and No More Heroes, a space opera trilogy set after a galactic war has wiped out much of humanity.

She is also the author of 199 Cemeteries to See Before You Die and Wish You Were Here: Adventures in Cemetery Travel. She blogs about graveyards as travel destinations at CemeteryTravel.com.

You won't be surprised to know that she likes long walks in the moonlight and old graveyards.