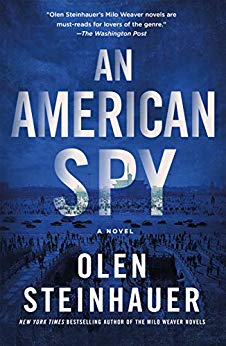 In Olen Steinhauer's bestseller The Tourist, reluctant CIA agent Milo Weaver uncovered a conspiracy linking the Chinese government to the highest reaches of the American intelligence community, including his own Department of Tourism---the most clandestine department in the Company. The shocking blowback arrived in the Hammett Award--winning The Nearest Exit when the Department of Tourism was almost completely wiped out as the result of an even more insidious plot.
Following on the heels of these two spectacular novels comes An American Spy, Olen Steinhauer's most stunning thriller yet. With only a handful of "tourists"—CIA-trained assassins—left, Weaver would like to move on and use this as an opportunity to regain a normal life, a life focused on his family. His former boss in the CIA, Alan Drummond, can't let it go. When Alan uses one of Milo's compromised aliases to travel to London and then disappears, calling all kinds of attention to his actions, Milo can't help but go in search of him.
Worse still, it's beginning to look as if Tourism's enemies are gearing up for a final, fatal blow.
With An American Spy, Olen Steinhauer, by far the best espionage writer in a generation, delivers a searing international thriller that will settle once and for all who is pulling the strings and who is being played.
An American Spy is one of The New York Times Notable Books of 2012.

Well, I left book 2 in the Milo Weaver series with a so-so feeling and wasn't sure if I was going to continue. Obviously, I decided to try one more time, and my experience with this one made up my mind. The thing that stood out most was that Milo is barely included in this one, which is odd to me since this is supposed to be his series. However, that was not the clincher for me. In fact, I've never managed to quite warm up to Milo, and the lack of any real character development in this one didn't do much to change my feelings for him. One thing that did clinch it is that the story is repetitive. So much so that this book could've been a much shorter read without repeated play by plays of scenes that have already happened. It felt a bit like a sports play being aired from different perspectives, which would've been okay had it not happened so often. Then we have quite a lot of characters, some who would come in briefly only to pop back up much later, leaving me to flip back through the book to remind myself of who they were. Finally, the story was seriously convoluted, which is saying something, considering the genre. In the end, I think it's a safe bet that this series is not for me, and I won't be continuing with Milo Weaver.