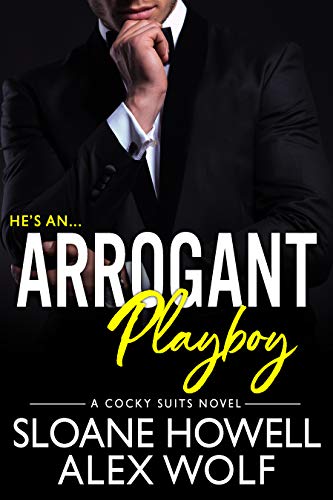 A new smoking-hot standalone romance from Sloane Howell and Alex Wolf."An enemies-to-lovers, second-chance romance I couldn't put down. Howell and Wolf are becoming the go-to for office romances with this series." - Chelle Bliss, USA Today Bestselling Author of the Men of Inked SeriesThere's a hot new hire.Too bad she's Donavan's ex.Oh, and there's one other problem--they hate each other.The last thing he expected to see when he walked into the office was Paisley Williams.She was the only person to graduate ahead of him at Columbia. The one woman who could give it back better than he could dish it out.She was also the biggest regret of his life. What he did to her was unforgivable.Now, she's back in Chicago, working at his firm.When old feelings interfere, stakes get raised, and secrets are revealed...Will they have a shot at making it the second time around? Or are they more doomed than the first?Arrogant Playboy is the fourth book in the Cocky Suits Chicago series.If you loved Cocky Playboy, Possessive Playboy, and Filthy Playboy then you will fall head-over-heels in love with Arrogant Playboy as we introduce you to Donavan and Paisley.

Okay, I'm just gonna say it, Donavan is a jerk. I mean, we've pretty much known that since book one of this series. But the question is whether or not he's a redeemable jerk, and I'd have to say a great big yes because much like the rest of the Collins men, he's a big ol' marshmallow in the middle. It just takes some work to get there, and the journey was terrific. We're four books in now, and every time I say the authors have given me a favorite couple, they top it with the next book, so I've decided that they can all be my favorites since this series has definitely become a must-read for me. This one does have its share of secrets to uncover, and I think it may be the most emotional of the series so far, but it's also got the witty dialogue that I look forward to and Donavan and Paisley are hot enough to set your Kindle on fire. All in all, another great couple in a series of great couples, and I can't wait to see what Sloane and Alex do next.