✱✱Book Review✱✱ The Girl You Gave Away by Jess Ryder 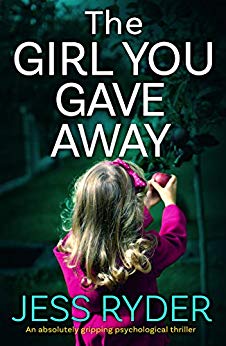 All she wanted was the life they had…It is the day of Erin’s fortieth birthday party. Pink and silver balloons drift through her garden, the platters of food are empty and the recycling is overflowing with empty wine bottles.As Erin mingles with groups of family and friends, surrounded by love and laughter, she feels like the luckiest woman alive. She has no idea what fate has in store …Then a little red envelope lands on the doormat and everything changes.Inside is a birthday card from somebody she never dreamed would get in touch. Its message is a chilling reminder of the dark past that Erin has worked so hard to bury, a past that could put her precious family in terrible danger…A gripping, spine-chilling read brimming with secrets and lies. If you loved The Girl on the Train or The Woman in the Window then this dark, twisting psychological thriller from bestselling author Jess Ryder is guaranteed to have you gripped.

Maybe it's just a personal pet peeve for me, but subtitles on books that make big claims irritate me. Especially when they don't deliver, and this one did not. It started out well enough, but it quickly fizzled, and I didn't find anything particularly gripping or thriller-like. What I found was a story that is more domestic drama than psychological thriller, and a lot of characters that aren't all that likable. There are a number of twists, but to be honest, it felt like the author was throwing everything she could think of at us in the hope that something would stick. Sadly, the result is that very little did, at least for me. Instead, it made for an over the top, convoluted story. Despite that, there was still some lagtime, especially in the chapters dealing with Erin's past. Finally, we come to the ending - and I do mean finally because that's pretty much how I felt - and that ending was lackluster at best. For so much angst, it's all rather simply settled in the end, and it just felt rushed. This is my first read by Jess Ryder, and I will say that she does write descriptively, and I felt like this story did have promise. I just think that sometimes less is more, and this book could've used a bit of that.

❃❃ARC courtesy of NetGalley and Bookouture