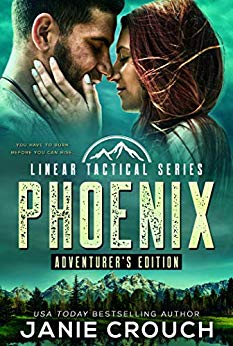 Adrenaline junky.
Adventure traveler.
Extreme sport sensation.They’re all labels Riley Harrison—known to the world as Phoenix—wears as easily as the tattoos covering his body.But it’s his role as undercover operative for Linear Tactical’s kidnap and ransom unit that makes his blood sing. Riley uses his celebrity status to help infiltrate locations and situations nobody else can get into.In. Out. The fight is usually over before the bad guys know it’s begun or that Riley was involved.But his skills and celebrity status won’t help when he discovers the woman he loves is keeping unbearable secrets and in a danger he never could’ve imagined.She wants Riley to stay far away from her.That’s not going to happen.But he’ll have to be willing to lose everything to save her. To save them.Phoenix will learn you have to burn before you can rise.

Here we are, eight books into the Linear Tactical series, and if I've learned anything, it's not to say that this is my favorite couple because Janie Crouch will prove me wrong. Soooo, I'm not gonna say it even though Boy Riley and Girl Riley are absolutely lovable and totally unputdownable. Both Girl Riley and Boy Riley, aka Wildfire and Phoenix, are kind of Linear Tactical adjacent, but they're no less a part of the family. Their story is a terrific combination of sweet, sexy, heartbreaking, and frustrating. Broken up or not, Phoenix and Wildfire are magnetic. They couldn't stay away from each other if their lives depended on it. Of course, this wouldn't be a Linear Tactical story without some danger and suspense, and that comes from two angles in this one. We also get to visit with some past favorites in the series. That said, this one does still stand on its own, but once you meet these wonderful characters, you'll want to know more about them, and they're all great characters with engaging stories. Phoenix just happens to be the latest. All in all, the Rileys' story is another impossible to put down romantic suspense in a whole series of them.

❃❃ARC courtesy of the author