Reaper's Pack
All the Queen's Men Book 1
by Rhea Watson 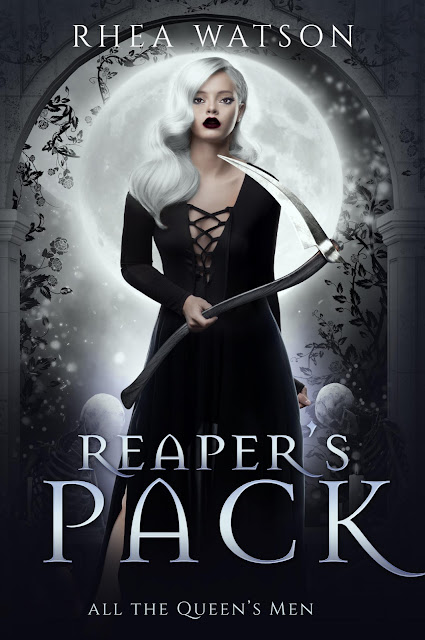 One grim reaper. Three hellhounds who refuse to bow down to her. A monster hunting them in the shadows…
Ten years ago, I was judged worthy of life after death and returned to the mortal realm as a grim reaper. Scythe in hand, I guide souls to deliverance—and it’s time for a promotion.
My new territory is triple the size of any I’ve worked before. High death rates mean one busy reaper, and the only way to keep up is with a pack of hellhounds. Faithful. Strong. Merciless. Hellhound shifters are a reaper’s right hand in the field, shepherding and guarding souls until they can be reaped.
We get our pick of the litter from the best breeders in Hell, but for some reason, I’m drawn to the pack no one wants.
An alpha who refuses to yield.
A beta who doesn’t take me seriously.
A runt who flinches at every command.
I want them—even if they don’t want me.
Because the hunger in their eyes tells a different story. But the fact that they can’t decide whether to love me or hate me, fight me or screw me, is making our situation way too complicated.
Still, I refuse to give up. If this infuriatingly handsome trio can’t be trained, if we don’t pass the trials, they go back to a cage and a cruel demon master.
Yeah. Not happening.
Reapers and hellhounds are natural allies, and the sooner we secure our bond, the better, because as it turns out…
All our lives depend on it.

Reaper’s Pack is a standalone why-choose paranormal romance and is part of the ALL THE QUEEN’S MEN series. Each book in the series is a full-length standalone featuring layered heroes and a headstrong heroine who never has to settle for just one happily-ever-after. The books can be read in any order and are part of the same supernatural universe.

This is one seriously good book! I tend to take notes as I read, just little things that strike me jotted down for later. When I looked back over my notes for Reaper's Pack, I realized that I hadn't jotted down much - pretty sure it's because I didn't want to look away long enough. What I do have are the words intoxicating, thoroughly compelling, exceptional world-building and character development. And what it all amounts to is the first line of this review - one seriously good book.
I've read several reverse harem romances - some I liked, some I didn't, and most of those have fallen under the paranormal/supernatural genre. As far as I'm concerned, Reaper's Pack is a cut above any I've read so far. I mentioned world-building, and I won't go into details so I don't spoil it, but I love Rhea Watson's twist on reaper and hellhound lore. And the suspense part of the story? My, oh my, but that was terrific.
Finally, we come to the characters, and since I've already mentioned those too, I'll just say that the author paints a vivid picture of the characters. So much so, that as unbelievable as they are in terms of the real world, it's like you can just reach out and touch them. And let me tell you, Knox, Gunnar, and Declan would certainly be enough to convince me to jump on the #WhyChoose bandwagon. Of course, we can't leave out our heroine, Hazel, who is one tough reaper.
I realize that I haven't given much in the way of details, and I'm not going to. (No spoilers here). What I will say is that this is not a book to just barrel through. Rather, it's a story to soak up and enjoy every word. I say that, but the problem is that the story is so completely engaging, so wonderfully done that it's impossible to put down. So much for not barrelling though, right? To sum it, if this debut is even an inkling of what we can expect from this author, then I want more, lots and lots more, and in terms of a series starter, I'll just say that Rhea Watson has set the bar quite high for whatever is to come for the All The Queen's Men series, and I can't wait to see what's next.