✱✱Book Review✱✱ Some Days Are Dark by Miranda Smith 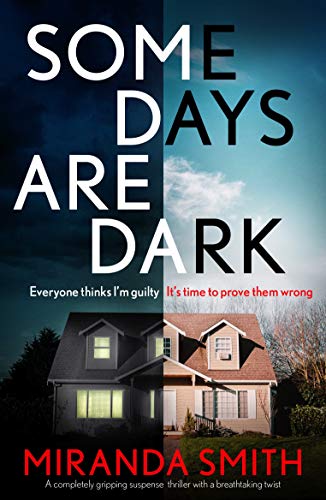 When you have nothing to lose, how far will you go to save yourself?Everyone in Whitaker was sure Olivia Miller shot her husband, until Marcus Rowe confessed. But a month before the trial, Marcus has been proved innocent—putting Olivia back in the frame.Olivia is the first to admit she isn’t perfect. She’s made a lot of mistakes in her life, the worst of which was marrying Dane Miller. She fell for his kind eyes, his lack of judgement—she thought she could be free with him. That was before the chaotic parties, the dangerous friends, the lies… But one bad choice shouldn’t mean a life sentence. Now her friends are turning away from her, gossiping about her wherever she goes, wondering when she’ll be arrested this time.Olivia isn’t going to run from the stares, from the whispers, from the doubts. She won’t leave her beloved son behind, or give her ex-husband Frank and his new wife any excuse to stop her seeing him. And if the police and the world think she’s guilty, there’s only one thing she can do—prove her innocence herself.But if Marcus didn’t murder her husband, then the real killer is still out there.And they’re not going to want Olivia stirring up the past…An absolutely gripping, heart-pounding suspense novel about bad choices and second chances. Perfect for fans of Gone Girl, Karin Slaughter and Lisa Gray.

Some Days are Dark makes some mighty big promises in that subtitle. Sadly, it doesn't quite deliver for me. The opening line of the book was certainly promising, and I was all set to hunker down and enjoy the read. Now, I will say that the book is well written for the most part. The writing is crisp and sharp, and this one could've been at least close to the promise in the subtitle had it not been dragged out quite so far. But it is what it is, and the longer this one went on, the less I wanted to keep pushing through. My biggest problem is that the plot has been done and done again, and it was way too predictable - and yes, that includes what I'm assuming is supposed to be the 'breathtaking twist.' Honestly, I think I would've enjoyed that twist more had I not been looking for it, but since I was looking for it, I just wound up disappointed. The author does give us some interesting characters in this one. None of them likable, but they are interesting in that looking at a train wreck sort of way. In the end, this one was more domestic drama than anything else. I didn't get that sense of tension or urgency due to the predictability of it, so I can't really say that I felt any real suspense or thrills. It's just too bad that the rest of the book didn't live up to the terrific opening line.

❃❃ARC courtesy of NetGalley and Bookouture