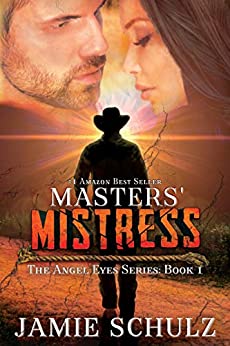 *** #1 Amazon Best Seller from the award winning author of Jake's Redemption ***A man bound by chains.
A woman burdened by regret.
Will love set this tortured pair free?In this nightmarish future where women own men, Bret Masters refuses to serve anyone. But after spending years evading slavers in the mountains of the Pacific Northwest, he's furious when he's finally caught and sold. So, although his mistress has a pretty face and deliciously tempting curves, he vows to escape.Angel Aldridge hides her pain behind fences as sturdy and vast as her ranch. And even though her newly acquired slave is a ruggedly handsome cowboy, she's not about to let her fantasies endanger the people she swore to protect. But between her always-watching enemies and her wounded heart, she's reluctant to admit she may need him in more ways than one...As the two toil side by side, Bret is surprised to discover Angel's vulnerability and her compassionate nature. And the more time they spend together, the harder she finds it to resist her feelings and to soothe her lonely soul. But when they're stranded alone together, the barriers between mistress and slave may not be strong enough to withstand their red-hot attraction.Can Bret and Angel overcome their fears to sow the seeds of lasting love?Masters' Mistress is the steamy first book in The Angel Eyes futuristic dystopian cowboy romance series. If you like complex characters, gritty western settings, and slow-burning desires, then you'll adore this enthralling story.Buy Masters' Mistress, Book One of the Angel Eyes Series, to ride into a passion-filled future today!This book has an HFN ending and opens the door for book 2 of this continuing series.Please note: Intended for mature audiences. This story contains some unsettling and violent subject matter that sensitive readers may find disturbing. Reader discretion is advised.

Masters' Mistress is a slow burn dystopian romance. Now, I'll admit that anything set in a dystopian world isn't normally my thing, but Jamie Shulz has created an intriguing world with this series. That said, this one is quite long, and the romance moves much slower than I cared for. There's a lot of back and forth between Angel and Bret, and while it is understandable given the world they live in, it became a bit much after a while. This is part of a continuing story, so we do get an open-ended conclusion, which is kind of disconcerting after such a long book. In the end, there were things I liked about this one, and the author has certainly painted some well-rounded characters, but the slow pacing made an already long book seem even longer. Nevertheless, it was worth the read, and I still think this is an interesting world. I just feel like it needed a bit of tightening up.