✱✱Book Review✱✱ The Girl in the Game by John Manchester

The Girl in the Game
Ray of Darkness, #3
by John Manchester 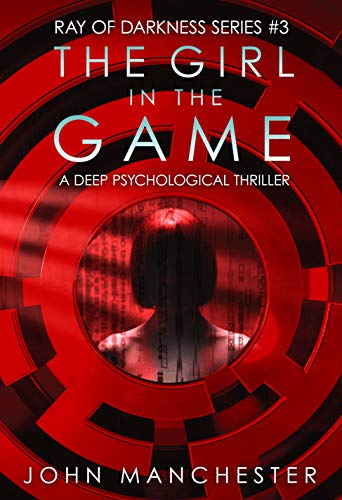 Ray Watts is recently--if not entirely happily--married. His art career is moribund and his heart just isn't in his job writing zombie books. When his friend Jo brings her niece Faye to his struggling art gallery for a visit, he feels an instant spark.

His art career springs miraculously to life, and he's enthralled with the tablet game Faye turned him onto. But there's something strange about his new job, and, come to think of it, about that game too. Oh, and there are those local girls that have gone missing...

Soon everything Ray holds dear is at risk--his marriage, his new job and the people he loves.

The Girl in the Game is book three in the Ray of Darkness Series. It also reads fine as a stand-alone.

I think The Girl in the Game is one of those books that people are either going to love or not with very little middle ground. Unfortunately, I landed in the latter category, and there are a couple of reasons for that.

First, let’s start with the series. This is book three in the Ray of Darkness series, and here’s where I’ll tell you that on the surface, this series should’ve been right up my alley. After reading the blurbs, I assumed that the series followed a couple of characters but could technically be read as standalones. Well, you know what they say about assuming things. I suppose that I was technically right about the standalone thing, but there were a few things I felt like I was missing while reading book three. It wasn’t anything huge, or at least I don’t think so, but the feeling was there.

Now, I’ll admit something. I did try to read the first two books in the series, but I just couldn’t get into them. So, it is possible that the attempt colored my opinion before starting this one. I like to think that I could’ve still gone into this one with an open mind, but in the interest of full disclosure, there is that chance.

As for this third book in the series, I did try. I really did, but I struggled all the way through this book. The story is quite busy, like messy busy. I have no problem keeping up, but the writing is choppy at times, and the conversations between the characters often feel stilted – neither of those did much in the way of improving my experience. Of course, it’s entirely possible that the busy storyline was intentional, but it just didn’t work for me.

Finally, we come to the characters, and honestly, I didn’t much care for any of them, including Ray. He drove me nuts pretty much from the start. I realize that certain things relied on certain actions from him, but he just didn’t seem like the sharpest tool in the shed with the decisions he made. And his wife isn’t much better. It reached a point that I caught myself rolling my eyes every time it was mentioned that she’s a lawyer. I get it, she knows legal stuff. Nuff said.

I think it’s safe to say that this book is definitely not for me. I do enjoy psychological thrillers, and I’m always up for a challenge, but this story and these characters challenged me past the point of entertainment. As I said, I do think this one will be loved by many, so there is a market for the story, it just missed its mark in me.