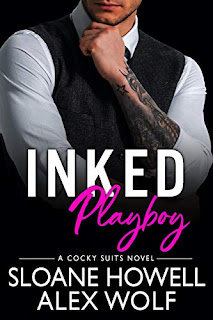 A new smoking-hot standalone romance from Sloane Howell and Alex Wolf."Howell and Wolf consistently nail these office romances one after another. Read this series!" - Chelle Bliss, USA Today Bestselling Author of the Men of Inked SeriesIt all starts with a forbidden one-night stand.It should end there, but it doesn't.Cole Miller could have any woman on the planet--except her.Harlow Collins is off-limits for a million reasons.But, there's something about her jet-black hair and icy-blue eyes that sear a hole in his chest every time he catches a glimpse of her.It's more than her looks, though. There's something real--a connection between them.Both of them feel it.She's reluctant.He's insistent.When all hell breaks loose, only one question remains.Will their relationship survive?

Holy Hotness! Cole is terrific! And he and Harlow are absolutely perfect together. From the banter to the can't keep their hands off each other chemistry to the feels, I loved everything about Cole and Harlow's romance, including the fact that he's the one to dive in headfirst almost immediately. He knows what he wants, he's completely determined, and he just may be the only man on the planet who can handle the ball of fury and toughness that is Harlow Collins plus be tough enough to deal with the rest of the Collins clan. I've liked the sassy Harlow since her first appearance in this series, so it was great to finally get to know more about her, and Cole - well, Cole is one of my favorite types of characters. He's a bit broken and his story will rip your heart out, so even though he is all alpha male on the outside, he's still a bit lost and scared on the inside. So, what we have is an absolutely unputdownable addition to the Cocky Suits Chicago series, and I can't wait to see what this dynamic duo does next.