✱✱Book Review✱✱ One Month Only by Kate J. Blake

One Month Only
Tuscany Nights Book 1
by Kate J. Blake 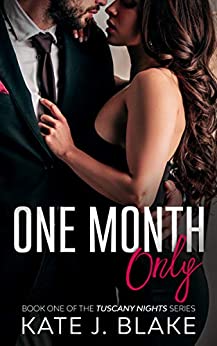 I’m a billionaire, I’m a chaser, I’m a wolf. I worked too hard to get where I am now, so I don’t need any distractions, especially the one called LOVE.Don't get me wrong, I love and enjoy sex, but all I need to do to have a fuck is to show a woman my Amex Black Card and let her hear my Italian accent and here we go: a one-night stand guaranteed.Everything worked just fine for me until a chance meeting with her—Angelica Sorreno—when she came back into my life. She is like a strong, terrifying tsunami that blows everything in its way.She asked me for help and I agreed, but only because we were friends, and not because I used to have feelings for her.It’s just that...I’ve made a mistake, a huge one: I’ve tasted her and she happened to have the most delicious pussy I've ever tried.Now I don’t think I can let her go that easily.

One Month Only is kind of a second chance romance, but not. I suppose it's more that it's a second chance in Ricardo's mind. Either way, the story is pretty lighthearted overall. There is some angst, but it's not over the top even as we get to that cliffy - a cliffy that comes out of nowhere! It is a quick read, and I suppose I'd say this first Tuscany Nights book is sort of an introduction to the characters and the beginning of their relationship. That said, I struggled a bit with these two. Both feel a little immature? innocent? Naive, I guess that one says it best. I just don't get the vibe of adult business people from these two, especially Ricardo. I had a hard time finding a connection with Ricardo, and maybe that naivety is the reason? Maybe it's that I didn't see the chaser or the wolf described in the blurb. I'm really not sure, to be honest, but something about this character just didn't work for me, and while I started warming a little toward the end, I didn't quite get there. And that pretty much sums up this relationship for me. I will say that as a debut, Kate Blake certainly shows talent, and even though this one wasn't the book for me, I'll be interested to see this author's growth with future books. I also have to add that her timing on that cliffy was terrific. It was just right for leaving the reader dying for whatever's next.