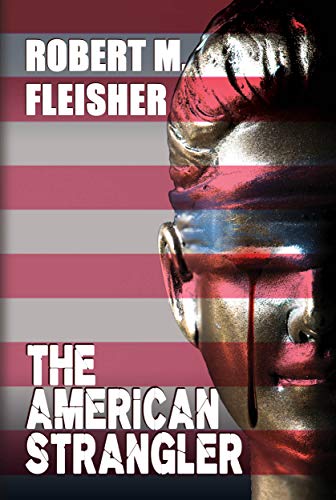 Simple and sweet. We all know how lots of people hate lawyers, especially if they have ever been sued. Dr. Ron Rellick loses everything, including his sanity, to a malpractice claim and goes homicidal.

Get inside the mind of a good man turned violent. See how the evil of corrupt lawyers leads to unforgiving vengeance. Dr. Rellick becomes the hunter to avenge what he sees as the scales of justice fractured and out of balance.

Momma Says: 4 stars ⭐⭐⭐⭐
Dark, twisted, a little preachy, compelling, thought-provoking, shocking, gritty, and gripping - The American Strangler is all of those and more. We've all heard a few lawyer jokes in our time, and whether we've ever been sued or not, most of us have an opinion about frivolous lawsuits, the lack of justice in the legal system, and those who would abuse the many problems with that system. Robert M Fleisher takes it a step further and gives us a serial killer. But Ron Rellick isn't just any serial killer. Here's a guy who definitely gets a raw deal, but he doesn't react the way polite society would expect him to act. Oh no, this guy becomes the hunter, and his prey is far from ordinary. Even so, I'm not sure I'd call this one a psychological thriller. It is disturbing, and the story has elements of a psychological thriller, but it doesn't have the twists I would expect from the trope. In fact, this one falls under a couple of different categories in my opinion. It is a crime thriller, but there are times when the pacing slows down and it feels more like a crime drama - there is a difference. Keep in mind that most of the book is focused on Ron Rellick with only glimpses of other characters throughout the story, so it's a bit different than those tropes as well. Whatever you want to call it, this one is an intriguing read, one that makes you think. It's written a little different than I would've expected, and at times it feels dry like you'd find in a non-fiction novel, which is also where it gets preachy, but oddly enough, it works for The American Strangler. Those parts of the story give it a true crime feel that you can't help but stop and think about. There were a couple of explicit scenes later in the book that just seemed like they were more for the obligatory bit of spice, or shock value in one instance, than adding anything to the story. I wasn't offended by it, although some may be, but it just didn't feel like those parts were necessary. Then we come to the conclusion, and I don't want to give it away, so I'll just say that I didn't see that coming, but at the same time, it was fitting. To sum it up, The American Strangler is a bit different than anything I've read lately, and it's one I won't soon forget.
❃❃ARC provided by the author