✱✱Book Review✱✱ Season of the Ghost by Don Meyer

Season of the Ghost
by Don Meyer 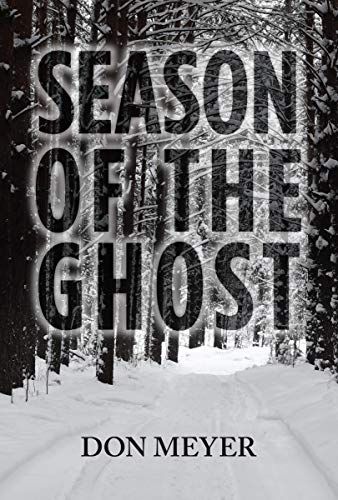 Looking at the arrangement of chairs by the sheriff’s desk, Deputy Pete Matson broke the silence. “Have a party here this afternoon?”Pulling himself to the desk, Sheriff Joe Redfield sat forward, resting his elbows on the surface. “Huh… No, Pete, just some people came in.”“Problems?”“No, well, yes… another contact with… well, sighting of that ghost, you know the story.”“So what, it happens quite often this time of year.” Pete said casually.“Right, Season of the Ghost as you so often eloquently put it.”Smiling, Pete moved forward, scraping the chair as he did, leaning on the sheriff’s desk.Looking directly at Pete, Joe pointed. “Do you believe in ghosts, Pete?”“Let’s just say the jury is still out on that one. I don’t believe straight up, but I don’t disbelieve either. I would be open to… well, you know…” Pete sat back in his chair.Joe lifted his feet, dropping them to the floor with a thud and spun to face Pete, choosing his next words carefully. “That’s the whole ballgame, Pete, a ghost. Everything always points back to that damn ghost story. Do you see it any other way?”“If that’s your case Joe, then go for it, but you might have a hard time selling that pitch to anybody. You might want to think it through first on just how you want to approach that theory.” Pete leaned forward, speaking softer. “You know Joe, I do agree with you… well, somewhat… well, I don’t know how in the hell you are going to prove a ghost did, or had anything to do with, or that anything, involves a ghost.”Nodding in agreement, Joe looked up at his deputy. “That’s the rub, Pete. What the hell else am I suppose to believe? Look at the simple facts. This ghost appears… well, next thing you know, a couple of kids are found naked, dead and frozen solid. So Pete, how would you answer that one?”“I guess we have our work cut out for us then, now don’t we?” Pete sighed. “Like I said Joe, I’m right there with you, but how do we prove any of this, I mean. Wait, so are you saying maybe this isn’t a ghost story?”“Don’t know that either.” Joe rubbed his hands across his face again. “The only way this works is if it is in fact a ghost story, but again that’s the rub.”

Momma Says: 3 stars⭐⭐⭐
Ghost story? Crime thriller? Season of the Ghost is maybe a little of both, but it never quite reaches what I would consider a thriller, and it isn't particularly creepy either. Strange, maybe, or odd, but it was missing that something that makes your heart race, makes you want to figure it all out. In fact, the whole thing was a little different. Not so much as to be completely original, but it is different - enough to keep me turning the pages to figure out the story's secrets, but the whole of it still left me somewhere in the fair to middlin range.
Some things were a little too easy to figure out while others were more confusing, and I'm not sure if the confusion was intentional to keep the reader guessing or if it that's just the way it was written. There are some odd word choices or spellings throughout the book that are distracting and make the story seem stilted, especially during dialogue.
The characters were much the same for the most part. I did like Sheriff Joe Redfield, but a lot of the characters felt one dimensional, so it was hard to get invested in any of them other than the Sheriff. Of course, he is a major player in this game, so it helps that I liked him at least, but the other characters needed a little more - well, a little more character.
In the end, Season of the Ghost had things I liked and things I didn't, but I did finish it, and I have to say that after everything that happened throughout the story, those last few pages were certainly fitting. They didn't exactly reveal every secret, but it worked for this story.