✱✱Book Review✱✱ The Secret She Kept by J.S Ellis

The Secret She Kept
Why would the dead girl lie?
A gripping psychological thriller with a breathtaking twist!
by J.S Ellis 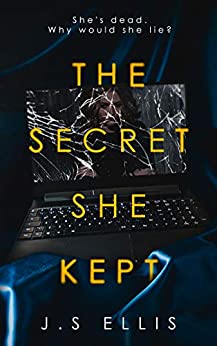 She’s dead. Why would she lie?

Days before her murder, Anthony’s friend, Lottie, lent him her laptop. Curiosity getting the best of him, he clicks on a file and finds videos recorded by her in the year leading up to her death. Within those recordings, she exposes dark secrets someone will kill to keep hidden, and Lottie’s toxic relationship with Anthony’s long-time friend, Davian.

When Anthony’s childhood friend, Davian is placed under arrest for the murder, Anthony refuses to believe he could do such a thing but Lottie was infatuated by Davian. More damning evidence piles up, Anthony wonders if it’s possible a man he’s known for most of his life has kept a sinister side of himself hidden.

Now, Anthony faces an impossible choice; turn the laptop over to the police and risk being accused of hindering the investigation, or try to solve the case himself. Lottie gave him the computer for a reason. There was something there she wanted him to see. Can he put the pieces of the puzzle together in time to uncover the killer?

The Secret She Kept has a terrific premise and twist. The problem is the journey to get to that twist, and it does feel like a journey, seems to take forever. The story is a lot of Anthony remembering Lottie as he watches a series of video clips that chronicle Lottie's last year, but very little actually happens until the last couple of chapters. This one does depend a lot on the unreliable narrator as a plot device, and if ever there were a story that could benefit from that, it would be this one. I suppose it does help, but it's just not enough. In addition to both Anthony and Lottie being unreliable, they're not very likable. There are a number of reasons for that, but to go into any of them would include spoilers, so I'll just leave it at try as I might, I just didn't like either of these characters. Now, that's not a requirement for me, especially in this type of thriller, but what I do require are the actual thrills, those elements that create a rising tension to make me want to continue reading to the end. I did finish, but mostly it was waiting for 'breathtaking twist' that's promised right there with the title. Granted, it was a pretty good twist, but it felt like I started a book, read a bunch of video journal entries that were really kind of boring, and then bam, we get this big twist. Incidentally, I had figured that twist out before I got there, but figuring it out wasn't a big deal for me. Sure, it's loads of fun when I'm stumped by a book, but I can still enjoy the read even when I have it figured out. I mean, I can still recognize a great twist even when I do see it coming. The thing here is that I just didn't enjoy the rest of the story all that much.