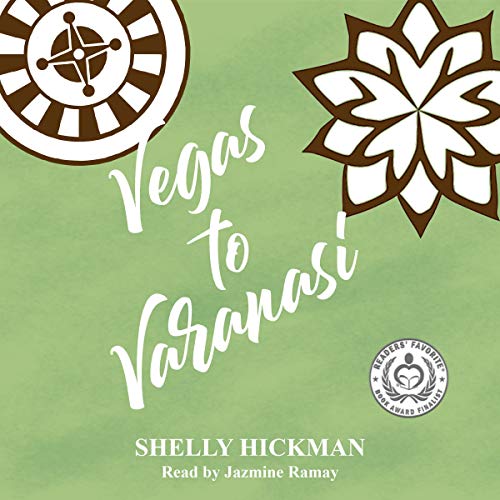 Anna has never been the beautiful one; she's always been the nice one. So when the gorgeous man sitting across the table at a wedding reception remembers her from high school - and quite fondly at that - she's taken off guard.

Formerly overweight and unpopular, Kiran has never forgotten Anna, the one person who was kind to him when no one else could be bothered, and Anna's a bit flustered as she slowly comes to grips with his intense attraction for her.

In what feels like a romantic dream come true, all-grown-up, hunky Kiran invites Anna on a trip to Varanasi. But her troubled, whack-a-do ex-boyfriend starts interfering, creating drama at every turn, which begs the question, can nice girls really finish first?

Momma Says: 4 stars⭐⭐⭐⭐
Vegas to Varanasi has a charm about it right from the start, and I can't say that it's due to any one particular thing. Instead, I think it's a combination of several things that work just work wonderfully together to create a story that's fun, witty, emotional, and romantic without being too much of any of those.
The characters are likable – well, most of them are. We do have one or two stinkers in the bunch, but it wouldn't be nearly so well-rounded without them. I love that Shelly Hickman gives us a romantic couple that is all grown up. Anna and Kiran are at an age where we would expect them to be settled, but as so often happens in life, things aren't always how we expect them to be, and these two are handling life the best they know how. Kiran is an absolute sweetheart from his first appearance onward. He's a little more understanding than most, but I feel like that's part of his charm. The star of our show, Anna, is a hoot. I love that she's honest with herself about her insecurities, and she doesn't make apologies for who she is, even when she is snickering at bathroom humor. Goodness knows life has thrown her a few curveballs.
The story is fast-paced, and I'll be honest, whether it's because I can relate to that life after forty craziness or because the characters and story are just so much fun, I found it hard to hit that pause button even when I knew I had to. Of course, the story isn't without some seriousness, and considering what part of that is, I have to say that it was handled quite well. Hickman adds a touch of levity to the situation without making it seem like she's poking fun at the problem. And I'll just say here that I have some personal experience with Anna's side of that problem. It's a tough thing to deal with, but looking back, I can see the humor in some situations.
Jazmine Ramay narrates this engaging tale, and she injects great emotion with her voice. She also does a brilliant job with Anna's sarcasm, whether it's internal or out loud for all the world to hear. I'm a big fan of sarcasm, and the combination of writing and narrating here is terrific. The only drawback for me is that some chapters felt like they ended rather abruptly, but when I went back and listened again to those parts, I feel like it was the way those lines were read as opposed to how they're written. However, that was a small thing, certainly not a deal-breaker for me.
All in all, Vegas to Varanasi is a great combination of writing and narration. The characters are engaging, the story is entertaining, and I'd recommend it to anyone who enjoys a bit wit with their romance, not just those over forty. This author is new to me, but she's now firmly on my radar.