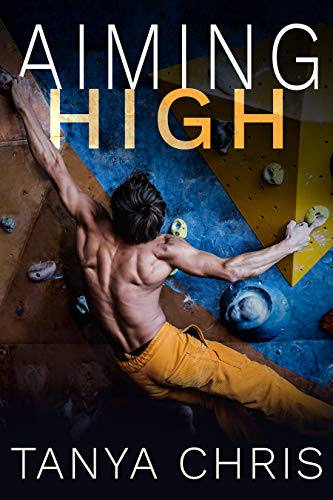 What they want most may be the one thing out of their reach.

Canadian rock climber Spencer Woolery has been training for the Olympics since before climbing was an Olympic sport. Dedication, determination, and strict adherence to a rigorous training regimen have gotten him to the summer games, but are they enough to elevate him to the podium? He’ll do whatever it takes to give himself the best shot, unlike American Flynn Loren, a.k.a. Flyin’ Flynn, who seems to succeed without making any effort at all.

Flynn loves climbing, but he hates being a professional climber. He’d rather be climbing real rock—outside in the sun having fun with his friends—than stuck indoors sweating over times and points and strategies. And he’d rather win Spencer’s heart than a medal, but that prize continues to elude him.

Against the backdrop of Olympic Village in Tokyo, Flynn and Spencer compete against each other and eighteen other men to see who’ll take home a medal and who’ll win something even greater than gold.

Note: this book takes place in an alternative universe where the Tokyo Olympics happened in the summer of 2020 as planned.

A sports romance about Olympic rock climbers isn't something I'd search for when looking for a new book to read. Honestly, you could fit what I know about rock climbing in a thimble with room to spare - mostly because a healthy dose of fear of heights keeps my feet planted firmly on the ground. Nevertheless, I do love sports romances, and I've found that I don't have to technically be a fan of the particular sport to enjoy the story. Plus I've become rather fond of Tanya Chris' books, so rock climbing wasn't a deal-breaker. As it turns out, I didn't need to know a lot about the sport because Tanya Chris does an excellent job of explaining what's happening without going overboard into too much on the sport and too little on the characters. That said, we do get a fair amount of rock climbing, so if you follow the sport, you won't be disappointed. For me, the characters are the meat of this one. Flynn and Spencer are those kinds of characters. You know the ones, they drive you a bit crazy when they can't seem to get on the same page, they're kind of perfect for each other but refuse to see it, and sometimes, you want to shake the ever-loving daylights out of both of them. Yes, those kinds of characters. Despite that, or maybe because of it - after all, by the time we get there, I've become invested - either way, I absolutely loved both of them. Of course, the author took me along on their crazy journey and made me feel the ups and downs, the triumphs and failures, and the realization of what's truly important to each of them. So, whether you're a fan of the sport or not, the romance will grab you and hold on tight. Another sweet, sexy, emotional romance from Tanya Chris.