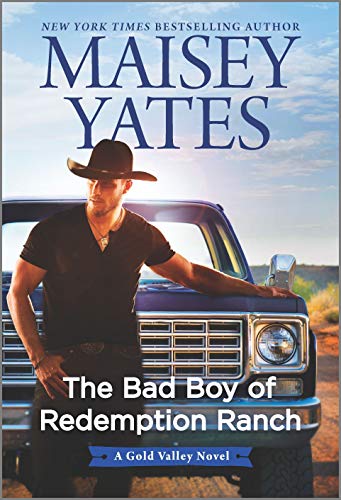 This rebel cowboy is looking for a fresh start—will he find more than he’s ever hoped for in Gold Valley?

Police officer Pansy Daniels is the poster girl for responsible behavior. Orphaned as a child, she has dedicated her life to safeguarding her local community. The last thing she needs is a hot-headed cowboy with attitude cruising into town. He may be her new landlord, but that’s no excuse for provoking her…or sending her heart into overdrive.West Caldwell has come to Redemption Ranch to put his past behind him. Flirting with a pint-size police officer who thinks he’s bad news is definitely not part of the plan, but it’s deliciously easy to get under Pansy’s skin. Then West discovers the vulnerability Pansy keeps so well hidden, and suddenly this renegade cowboy is in over his head. In her arms, West feels like the man he always wanted to be—but can he become the man Pansy deserves?

Momma Says: 2 stars ⭐⭐
Small town, sexy cowboy, opposites attract, and the first meeting is terrific - followed by some great banter in the beginning of the story. All of that should've made for my kind of romance, except that it doesn't quite work out that way. For the most part, I really like Maisey Yates' cowboy romances. They're a little over the top on angst sometimes, but I usually love the characters so much that I'm okay with that. However, I've run into a couple of occasions that I loved the cowboy but struggled with the love interest. This is one of those occasions, and try as I might, I could not make myself like Pansy. She started off okay, but the more I read of her, the less I liked her. We spend a good deal of time inside her head, and I've gotta say innocent is one thing, but Pansy is completely over the top. She's so immature that I felt like I was reading about a teenager more often than not. I'm trying not to venture into spoiler territory here, but I got thoroughly sick of seeing everything blamed on West. And I mean everything. If something didn't go her way, it was all his fault. Every bit of confusion, being late for an interview, being distracted - it's always his fault. Granted, he may the reason the reason for some confusion, some hanky panky may even be reason for oversleeping, but Pansy is 27 years old! That's right - 27, not 17, and since he didn't kidnap her, she's supposed to be a responsible adult. And this woman wants to be police chief! Gah! So, it's safe to say that I really didn't like Pansy. I get that she had some unresolved issues from losing her parents, but West has a few issues of his own, and I didn't see him blaming Pansy when he didn't get his way. Funnily enough, Pansy's epiphany comes when she gets exactly what she wanted, which is a little bit too convenient, and it surely didn't help my feelings about her. Had this epiphany come when she's sure things aren't going her way, when she's forced to see what's right in front of her, then maybe I could've come around to these two together. As it stands, I spent this whole book thinking that West was entirely too good a person for Pansy, and nothing happened to change my mind. What it boils down to is that it's pretty hard to enjoy a romance when you can't stand one part of the romantic couple, so this one ended up being a disappointment for me.
❃❃ARC provided by NetGalley and Harlequin