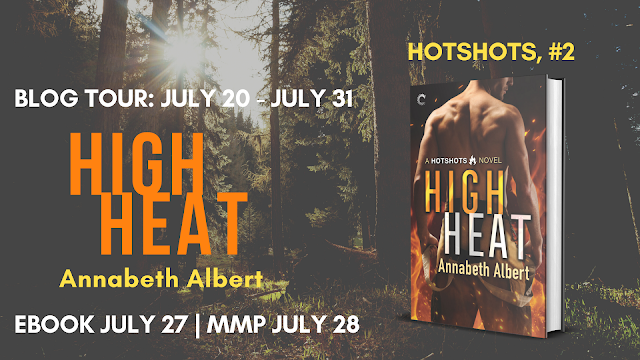 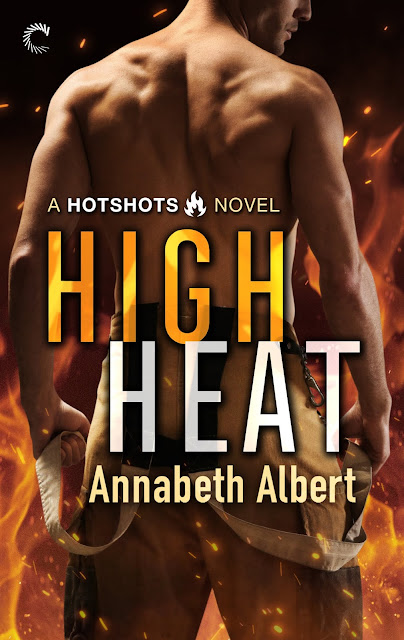 Annabeth Albert’s Hotshots series continues—the emotions and intensity of Chicago Fire with the raw, natural elements of Man vs. Wild.

Smoke jumping is Garrick Nelson’s life. Nothing, not severe injuries nor the brutal physical therapy that follows, is going to stop him from getting back with his crew. But when a lost dog shows up on his front porch, he can’t turn her away, and he can’t take care of her on his own. Thankfully, help comes in the form of his new sexy, dog-loving neighbor. As they work together, trying to re-home their little princess, Garrick can’t resist his growing attraction for the other man, even though he knows this guy isn’t the staying type.

Rain Fisher doesn’t take anything too seriously. He dances through life, one adventure at a time, never settling in one place for too long. When his hot, conveniently buff, neighbor shows up on his doorstep, dog in tow, Rain’s determined to not just save the adorable puppy, but her reluctant owner as well. He never expects their flirtation might tempt him into stay put once and for all...

Danger lurks everywhere for Central Oregon’s fire crews, but the biggest risk of all might be losing their hearts. Don’t miss the Hotshots series from Annabeth Albert: Burn Zone, High Heat, and Feel the Fire.

Momma Says: 4 stars⭐⭐⭐⭐
An age-gap romance with all the feels. We also get a bit of opposites attract with Garrick and Rain because they certainly make for an unlikely pair. Nevertheless, the chemistry is there in spades, and these two make good use of it. I liked Garrick in the first book in the Hotshots series, and I figured he was going to get me right in the heart with his circumstances, and boy, did he ever. Then we have the fun-loving Rain, who just fits perfectly into Garrick's well-ordered life whether he's ready or not. The only drawback was that the angst comes from one of my least favorite things, and I really wanted to shake both of them, but they're both just so darn lovable that it wasn't that big a deal to me. As I mentioned, this is the second in a series, and while this one technically picks up a bit after the events in the first book, the author gives us what we need to know so that Garrick and Rain's story can be read as a standalone. That said, once you start meeting these characters, you'll want to know the rest.

Emerging from the bathroom, he pulled up short in front of the bed where a very happy, very sleepy Cookie was lounging against his pillows.

“Hey! I thought I told you to lie on your bed.”

Thump. Thump. Wagging her tail, she gave him a canine grin.

“That’s the people bed. Yours is over there.” He pointed at her bed. “Go lie down.”

Helpfully, she scooted over about ten inches but otherwise didn’t seem inclined to budge.

“Five minutes, okay? Five minutes and then you’re going to your bed.” Sitting next to her, he adjusted the bed’s angle. Replacing his previous cheap king set with this setup had been a bit of a splurge, but it beat the rental hospital bed he’d had at his dad’s. He was a big guy. He needed his space. And he was not prepared to share that space with a stubborn pooch.

“Go lay down,” he tried again after giving her some pats, but all she did was move to the foot of the other side of the bed. Yawning and out of energy, he was no match for a stubborn dog. “Fine, fine. Let’s not tell Rain that you rejected his bed selection.”

Usually nights were hard—his pain level tended to spike at night in unpredictable ways, his sleep could be fitful, and his mind raced through hundreds of dismal scenarios. He’d never had an anxiety problem before the accident, but lately, calming down at night was particularly problematic. If he was physically exhausted, it was easier, but then physical tiredness tended to mean more pain, which meant more sleeplessness, which meant more time for worries to charge back up.

But that night he didn’t even need to play on his phone and was asleep even before he could try again to get Cookie to move. The next thing he knew it was morning—and not crack-of-dawn morning either, but a sunny eight o’clock. A banging noise was coming from the front door.

Had to be Rain come to walk the dog. And sure enough, his phone was full of several missed messages from Rain asking about a time to come over.

“Coming,” he hollered. Hell. No time to get dressed. Letting Cookie lead the way, he used the crutches to get as far as the wheelchair, then switched to the faster method to get to the door.

“Oh, good! You survived the night!” Rain greeted him cheerily. “And uh—wow. Um. You need me to wait a minute?”

Rain’s gaze was riveted to Garrick’s chest in a blatantly appreciative way he hadn’t experienced in months. Damn. Felt good. Too good. And his shorts were hardly designed to conceal his body’s reaction to Rain’s attention if his dick decided to power up like it had last night. Abruptly, he spun away from the door. “Come on in. Sorry. We slept late. Like ten hours. I can’t believe it. That never happens to me.”

“You must have needed it. Did Cookie stay in her bed all night?”

“She stayed quiet,” Garrick hedged, not wanting to hurt his feelings by telling him Cookie had rejected the bed but also not wanting to outright lie either. “She must have needed the rest too. You want to take her out? I’ll find both a shirt and her medication while you’re gone.”

“Sounds great.” Rain bounced on the balls of his feet before fetching the leash from the key rack where he’d hung it the night before. His hair was still up, but messier than the day before, and he was wearing silver shorts and a close-fitting pink T-shirt with several members of that pony show Garrick’s sister’s kids liked, and Squad Goals written under the ponies in swirly script.

“Nope. Didn’t want Miss Cookie feeling bad about being the only one in pink. I figured we could match. And I told you. I like it.” Rain’s eyes were defiant, daring Garrick to object.

“Hey, you wear what you want to wear.” Without coffee on board, he was struggling to sound supportive and not lecherous, because damn. Rain looked good in pink, all warm and glowing. It made his eyes more golden, and somehow the contrast with his sharp jaw did all sorts of interesting things to Garrick’s insides. While his taste in partners could be eclectic, the one unifying feature was usually confidence, because there were few things sexier than a fearless person who knew themselves and what they wanted. He’d already noted Rain’s innate confidence the day before, and today’s outfit choice only made him that much more appealing.

“Good.” Rain clipped the leash to Cookie’s collar. “We’ll be back.”

While they were gone, Garrick found a T-shirt of his own, black and plain because he didn’t have the same need for sparkle as Rain, but man, did he appreciate glam in people who enjoyed it. As he made the coffee, he watched Rain and Cookie coming up the sidewalk at a decent trot, Rain’s mouth moving like he was talking to the dog. Cute. So damn cute. And so very off-limits. 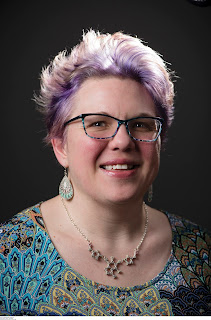 Annabeth Albert grew up sneaking romance novels under the bed covers. Now, she devours all subgenres of romance out in the open—no flashlights required! When she’s not adding to her keeper shelf, she’s a multi-published Pacific Northwest romance writer.

Emotionally complex, sexy, and funny stories are her favorites both to read and to write. Annabeth loves finding happy endings for a variety of pairings and is a passionate gay rights supporter.  In between searching out dark heroes to redeem, she works a rewarding day job and wrangles two children.