✱✱Book Review✱✱ Blog Tour: JUST LIKE THAT by Cole McCade 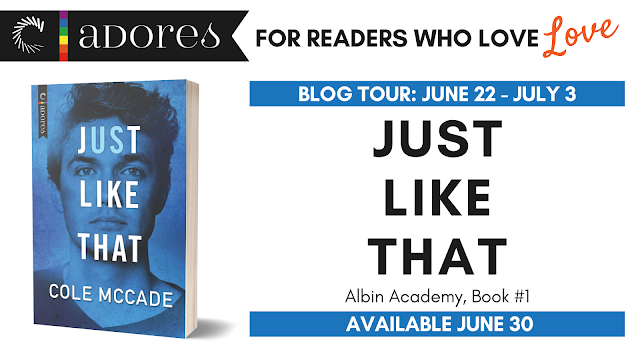 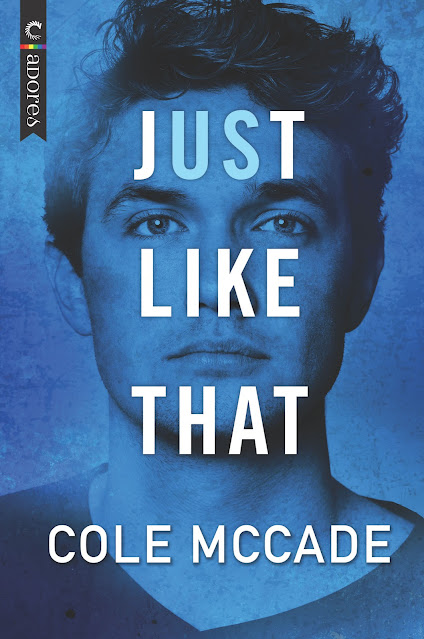 Summer Hemlock never meant to come back to Omen, Massachusetts.

But with his mother in need of help, Summer has no choice but to return to his hometown, take up a teaching residency at the Albin Academy boarding school—and work directly under the man who made his teenage years miserable.

Forbidding, aloof, commanding: psychology instructor Iseya is a cipher who’s always fascinated and intimidated shy, anxious Summer. But that fascination turns into something more when the older man challenges Summer to be brave. What starts as a daily game to reward Summer with a kiss for every obstacle overcome turns passionate, and a professional relationship turns quickly personal.

Yet Iseya’s walls of grief may be too high for someone like Summer to climb…until Summer’s infectious warmth shows Fox everything he’s been missing in life.

Now both men must be brave enough to trust each other, to take that leap.

In Just Like That, critically acclaimed author Cole McCade introduces us to Albin Academy: a private boys’ school where some of the world’s richest families send their problem children to learn discipline and maturity, out of the public eye.

Momma Says: 4 stars⭐⭐⭐⭐
First, this is my first experience with Cole McCade, but after reading Just Like That, I'm positive it won't be the last. The guy certainly has a way with words, and he uses them here in all the best ways. This story is a terrific mix of some of my favorite tropes, and it's one that was so easy to fall into. I found myself invested in Summer and Fox almost from the very first page. The more I learned about these characters, the more I wanted to know. I think the best way to say what I'm trying to say is that they're human. Neither is perfect, but they're pretty darn perfect for each other. As I said, this may be my first book from Cole McCade, but I will be checking out what's already available while I wait for whatever comes next in this series.

“Extinguisher first, then sand,” the voice ordered. “Dr. Liu, if you insist on getting in the way, at least make yourself useful and remove anything else flammable from the vicinity of the blaze. Quickly, now. Keep your mouths covered.”

Summer’s entire body tingled, prickled, as if his skin had drawn too tight. That voice—that voice brought back too many memories. Afternoons in his psychology elective class, staring down at his textbook and doodling in his notebook and refusing to look up, to look at anyone, while that voice washed over him for an hour. Summer knew that voice almost better than the face attached to it, every inflection and cadence, the way it could command silence with a quiet word more effectively than any shout.

And how sometimes it seemed more expressive than the cold, withdrawn expression of the man he remembered, standing tall and stern in front of a class of boys who were all just a little bit afraid of him.

Summer had never been afraid, not really.

But he hadn’t had the courage to whisper to himself what he’d really felt, when he’d been a hopeless boy who’d done everything he could to be invisible.

Heart beating harder, he followed the sound of that voice to the open doorway of a smoke-filled room, the entire chemistry lab a haze of gray and black and crackling orange; from what he could tell a table was…on fire? Or at least the substance inside a blackened beaker was on fire, belching out a seemingly never-ending, impossible billow of smoke and flame.

Several smaller fires burned throughout the room; it looked as though sparks had jumped to catch on notebooks, papers, books. Several indistinct shapes alternately sprayed the conflagration with fire extinguishers and doused it with little hand buckets of sand from the emergency kit in the corner of the room, everyone working clumsily one-handed while they held wet paper towels over their noses and mouths with the other.

And standing tall over them all—several teachers and older students, it looked like—was the one man Summer had returned to Omen to see.

He stood head and shoulders above the rest, his broad-shouldered, leanly angular frame as proud as a battle standard, elegant in a trim white button-down tucked into dark gray slacks, suspenders striping in neat black lines down his chest. Behind slim glasses, his pale, sharply angled gray eyes flicked swiftly over the room, set in a narrow, graceful face that had only weathered with age into an ivory mask of quiet, aloof beauty.

The sleek slick of his ink-black hair was pulled back from his face as always—but as always, he could never quite keep the soft strands inside their tie, and several wisped free to frame his face, lay against his long, smooth neck, pour down his shoulders and back. He held a damp paper towel over his mouth, neatly folded into a square, and spoke through it to direct the frazzled-looking group with consummate calm, taking complete control of the situation.

And complete control of Summer, as Iseya’s gaze abruptly snapped to him, locking on him from across the room. “Why have you not evacuated?” Iseya demanded coldly, his words precise, inflected with a softly cultured accent. “Please vacate the premises until we’ve contained the blaze.”

Summer dropped his eyes immediately—habit, staring down at his feet. “Oh, um—I came to help,” he mumbled through the collar of his shirt.

But then it had been seven years, he’d only been in two of Iseya’s classes…and he’d changed, since he’d left Omen.

At least, he hoped he had.

That was why he’d run away, after all. To shake off the boy he’d been; to find himself in a big city like Baltimore, and maybe, just maybe…

Learn not to be so afraid.

But he almost couldn’t bring himself to speak, while the silence demanded an answer. “I’m not a student anymore,” he corrected, almost under his breath. “It’s…it’s me. Summer. Summer Hemlock. Your new TA.” He made himself look up, even if he didn’t raise his head, peeking at Iseya through the wreathing of smoke that made the man look like some strange and ghostly figure, this ethereal spirit swirled in mist and darkness. “Hi, Professor Iseya. Hi.”

Cole McCade is a New Orleans-born Southern boy without the Southern accent, currently residing somewhere in Seattle. He spends his days as a suit-and-tie corporate consultant and business writer, and his nights writing contemporary romance and erotica that flirts with the edge of taboo—when he’s not being tackled by two hyperactive cats.

He also writes genre-bending science fiction and fantasy tinged with a touch of horror and flavored by the influences of his multiethnic, multicultural, multilingual background as Xen. He wavers between calling himself bisexual, calling himself queer, and trying to figure out where “demi” fits into the whole mess—but no matter what word he uses he’s a staunch advocate of LGBTQIA and POC representation and visibility in genre fiction. And while he spends more time than is healthy hiding in his writing cave instead of hanging around social media, you can generally find him in these usual haunts:

A new Carina Adores title is available each month: