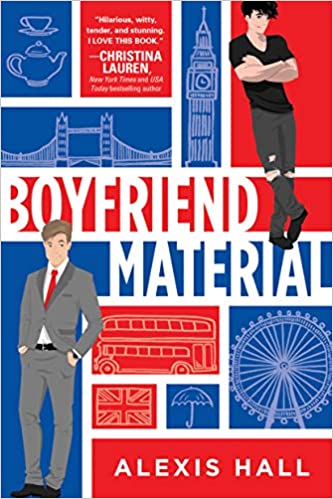 Wanted:
One (fake) boyfriend
Practically perfect in every way

Luc O'Donnell is tangentially—and reluctantly—famous. His rock star parents split when he was young, and the father he's never met spent the next twenty years cruising in and out of rehab. Now that his dad's making a comeback, Luc's back in the public eye, and one compromising photo is enough to ruin everything.

To clean up his image, Luc has to find a nice, normal relationship...and Oliver Blackwood is as nice and normal as they come. He's a barrister, an ethical vegetarian, and he's never inspired a moment of scandal in his life. In other words: perfect boyfriend material. Unfortunately apart from being gay, single, and really, really in need of a date for a big event, Luc and Oliver have nothing in common. So they strike a deal to be publicity-friendly (fake) boyfriends until the dust has settled. Then they can go their separate ways and pretend it never happened.

But the thing about fake-dating is that it can feel a lot like real-dating. And that's when you get used to someone. Start falling for them. Don't ever want to let them go.

Momma Says: 3 stars ⭐⭐⭐
So, Boyfriend Material. I went into this book expecting, or maybe hoping, for a romantic comedy that would take me away for a while. Things are entirely too serious right now, and I could really use some of those deep down belly laughs. From all the hype, I expected just that, and it is amusing, funny even. But I didn't find those take me away from it all laughs I was looking for. I think this one was just a bit too over the top for me, and it was compounded by a slow burn romance that's drawn out more than I care for in a RomCom. That's not to say it's a bad story - it's really not. In terms of fake boyfriend romances, it's got a good premise, and the author does give us plenty of amusing characters in addition to the romantic couple, who are a bit of a hot mess. Maybe this one just wasn't the book for me right now. It's certainly been very well received, so I am in the minority, but it is what it is. In the end, this one wasn't the laugh-fest I was hoping for, but it is an amusing romance, leaving me somewhere in the fair to middlin range.
❃❃ARC provided by NetGalley and Sourcebooks Casablanca