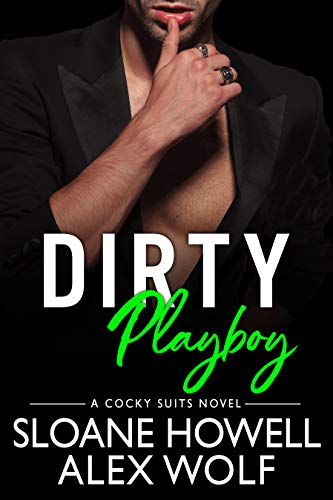 "Holy Hotness! Howell and Wolf nailed it with Dirty Playboy. It has all the feels! I am loving this series!" ~ Sophie Lark Bestselling Author of the Brutal Birthright Series

He’s obsessed with her.

She wants nothing to do with him.

Rick Lawrence doesn’t get attached to women. He beds them and sends them on their way.

Then, he sees her.

Mary Patrick is the ultimate good girl—religious, moral, responsible. She spends all her time at church or with her nose in a book.

The second he lays eyes on her he must have her.

She makes him want to be better.

He doesn’t even look at another woman for seven months.

She denies him every step of the way.

When he finally wears her down, gets his one big chance—his past catches up with him.

Secrets are revealed that threaten everything.

The only question that remains is…

Can they survive it? Or will it destroy both of them?

Momma Says: 5 stars⭐⭐⭐⭐⭐
Best one yet! Don't get me wrong, I've loved every couple in this series, and by this point, I fully expect Wolf and Howell to bring their A-games - but this time they went above and beyond. I've liked Rick from his first appearance in the series, and I've been waiting for this book since he got Mary in his sights.
Now, here's where I have to be careful not to venture into spoiler territory because there are some great twists here as we learn about Rick's past. I knew it was bound to be interesting, and I've been waiting to learn more about the cocky PI, but wow. That wasn't what I expected. It's terrific, but so not what I saw coming.
As I've mentioned with every couple, the chemistry is always terrific, so I expected the same for Rick and Mary. Let me tell ya, Mary may be on the innocent side, but she certainly has a vixen inside her. And when these two get going, they're hot enough to set your Kindle on fire.
This has been a series of alpha males and the strong women who make them want to be better versions of themselves, but none so much as Rick and Mary. She's so much stronger than she realizes, and I love that he wasn't changing just to win her over. It kind of felt like it started that way, but the more I learned about Rick, the more it felt like he wanted to be a better man to deserve Mary and not just as a means to an end.
So, we get a fun story with secrets to learn, a couple that generates loads of feels and enough steam for a sauna, some catch-up time with past favorites, and it all comes together for one unputdownable read. I don't know which character is next to find out he's not as invincible to love as he thinks he is, but I will say this - Alex Wolf and Sloane Howell have outdone themselves with Rick and Mary, and they've set the bar pretty high for whatever comes next.