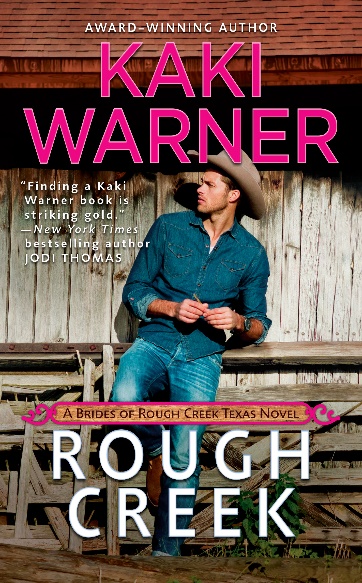 After serving eighteen months in prison for a crime he didn't commit, Dalton Cardwell is looking for a fresh start. What better place than Whitcomb Four Star Ranch? He doesn't regret taking the fall for his brother--he'd do anything to protect him. But now all Dalton wants is to keep his head down and focus on the horses--and on Raney Whitcomb.

Raney is outraged when she learns her mother hired an ex-con. Raney has worked hard for the ranch, sacrificing her personal life for the dream of building on her family's legacy. But as Dalton breaks down every misconception and even wins the good opinion of her sisters, Raney is forced to rethink her stance--and finally free herself to explore the heart-pounding tension that simmers between them.

Momma Says: 4 stars ⭐⭐⭐⭐
I do love a cowboy romance, so I was happy to dive into Rough Creek. This is my first read by Kaki Warner, and as I understand it, this is her first contemporary Western romance, having written historical romances. I will say that this book does have some of the flavor of a historical romance, some similar tones, but it is set in the here and now. The story also has elements of second chances - not necessarily for Dalton and Raney as a couple, but the romance is a second chance for each of them.
I found both characters likable. In fact, I liked most of the characters in this one, at least the ones we're meant to like, and there are what look to be some promising storylines to come as this series progresses. As for this couple, Dalton has this whole wounded soul vibe going, but at the same time, he flirts shamelessly with Raney, which of course, frustrates her to no end. She's a bit rigid and doesn't take well to change, so Dalton messing with her world was thoroughly amusing. That also means we get some fun banter, and it's not just between our romantic couple. I really enjoyed the dialogue in this book, and I'll just throw in right here that Raney's mother is an absolute scene-stealer and one of my favorite types of character.
The only drawback for me was that the book felt like it went on longer than it needed to. There's really not enough angst to warrant the length of the book. There were a couple of lags in the story where I found my attention waning, so I feel like it could've done with a bit of tightening up. That said, those times didn't last long, and Dalton and Raney did pull me back in, so it's not a huge deficit in my opinion.
All in all, this first in the series is an entertaining read with engaging characters, and now that I've met them, I can't wait to see what Kaki Warner has in store for them.
❃❃ARC provided by NetGalley and Berkley Publishing Group