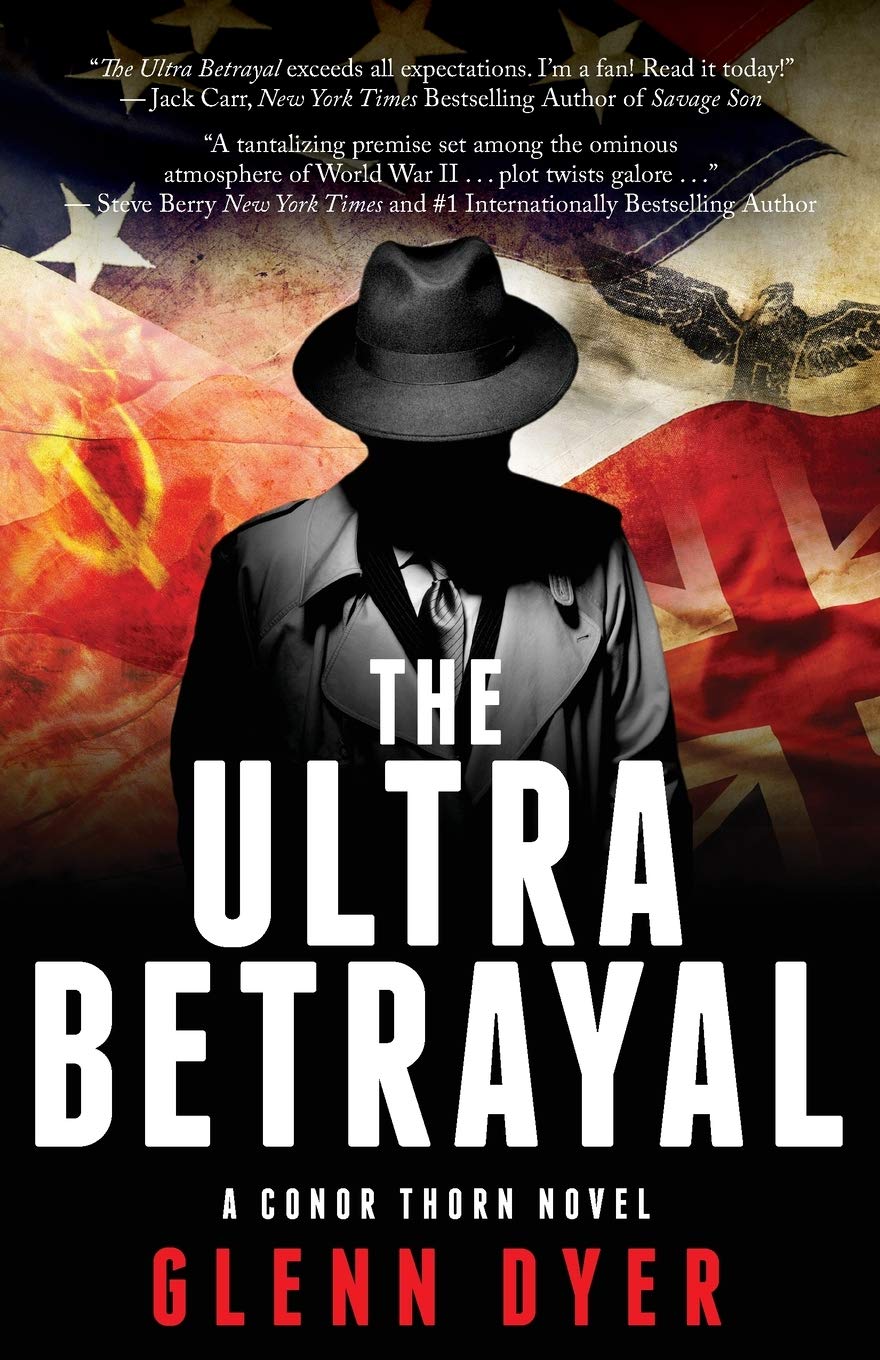 One man's dark deal with the Nazis could bring the Allies to their knees..

Autumn, 1942. Rule breaker OSS Agent Conor Thorn is assigned a mission to help the Allied war effort when a key Swedish cryptographer stationed in England goes missing. Thorn is determined to find him before critical information falls into enemy hands, but when his MI6 colleague vanishes trailing the code-breaker to Stockholm, Thorn is plunged yet again into a sinister Nazi conspiracy.

Other Books in the Conor Thorn Thriller Series:

A Conor Thorn Novel, Book One

A disgraced agent. A missing battle plan. Will he find redemption or damage the Allies beyond repair?

London, 1942. OSS Agent Conor Thorn is desperate for a second chance. After a botched mission in Tangier, Thorn knows failure is not an option. When confidential directives for Operation Torch, the invasion of North Africa, go missing, the agent must recover the plans before the Nazis thwart the crucial mission.

Thorn teams up with MI6 agent Emily Bright to seek out the traitor in their midst. Untangling the web of suspects leads them to Nazi sympathizers, double-crossing Soviet spies, and Vatican clergymen with motives of their own. As their mission grows more and more dangerous, Thorn and Bright have one chance to retrieve the document before it falls into enemy hands, leaving countless Allied troops in danger.

The Torch Betrayal is a high-stakes WWII thriller inspired by true events.

Conor and Emily shared a wooden crate in the back of the truck. Eve and Gunnar did the same. They had been on the road for ten minutes when the truck made a right turn and pulled to a stop. Conor pushed the rear canvas flap aside and saw that they had arrived at a gas station. Bobby came to the back of the truck.

“The driver said that he has to fill up for his deliveries tomorrow morning. That’s his routine. It won’t take long.”

“Long enough for a phone call?”

Conor hopped down and headed inside the station’s office. There wasn’t anyone inside, so he laid a few krona on the desk, dialed the Grand Hotel, and asked for Gus Karlson.

“Are you there yet?” Karlson asked.

“Close. Maybe another fifteen, twenty minutes. Any fallout from our fishing trip?”

“Quite a lot. Tolberg visited us. The C Bureau is pretty grumpy. The body count at the Andersson house was out of hand, as far as they’re concerned. They say that quite a few people from all three legations are going to be sent home. I might be one of them.”

“There were three dead Russians at the house, along with one German.”

“How did the Russians get involved?”

“They have eyes and ears everywhere, Conor.”

A man in a grease-smeared coverall walked into the office through a rear door. He held his hands up as if to say, What the hell?

Conor pointed at the coins on the desk.

The man shrugged and sat down.

“Could they have been a competing buyer for Lind’s intelligence?” Conor believed that, once the war was over, the shotgun marriage that was the relationship between the Americans, Brits, and Soviets wouldn’t last long.

“Wouldn’t put it past them.”

“Actually, they have been noticeably absent of late.”

“That’s not necessarily good news.” Conor saw Bobby waving at him from the cab of the truck. “Gotta get going, Gus. Keep your head down.”

“I could say the same thing to you. By the way, you taking good care of Ramsay’s Volvo?”

Conor dropped the phone in the cradle, gave the man a quick nod, and walked out to the truck. Conor stepped up into the cab and sat next to Bobby. He wanted to study the lay of the land as they made their approach to the harbor area.

Less than fifteen minutes later, they were driving along a road that ran beside a long wharf. The dockside was lit by a sparse number of streetlights. Three fishing trawlers were tied up along the wharf, all of their pilothouses lit up and their navigation lights on. Conor could see a few men washing down the decks with hoses. The driver pulled into a dirt lot adjacent to a long, three-story warehouse. At the near end was a sign for a fishmonger, most likely the driver’s boss. Farther down the quay, Conor could make out the shape of a motor gun boat tied up close to a single railcar. According to the extraction plan, it was motor gun boat 622, the Fairmile D. The Dog Boat. The same one that he and Donovan saw demonstrating high-speed maneuvers in the Thames. All armaments were removed from sight, and extra fuel was supposed to be on board. It was to fly the red ensign of a merchantman, crewed by trawler men from Hull. The captain, a man called Peter Scott, was former Royal Navy.

A sedan parked near the gun boat caught his attention. Conor couldn’t make out who or how many people were inside, but he knew they were enjoying cigarettes given the smoke drifting out the open windows.

The driver of the truck cut the engine, placed the keys in the visor, and said something to Bobby.

“Our friend here is going home to his family. He says we can stay in the truck as long as we like.”

Conor looked at his watch: 1934 hours. “Tell him we’ll be moving on in a few minutes. And thank him for the ride.”

The driver jumped down from the cab and headed up a sloping road toward the center of town.

“Do you see that car parked down near the railcar and the gun boat?”

“Not sure who they are, but the chances that they’re keeping an eye on our transportation out of Sweden is good. The problem is, they can’t see us board or we’ll never get out of here.”

“No time for that.” Conor got out and went to the rear of the truck.

Emily was sitting on the crate, gun held loosely in her lap. Eve and Gunnar were dozing. Gunnar’s hands were still bound behind his back.

“Emily, I’m going to drive us down to the dock where the gun boat is tied up. As soon as I stop, get moving and board.”

“Understood.” At that moment, Eve and Gunnar woke up.

“And for good measure, get the gag back in Gunnar’s mouth.”

Conor walked around to the driver’s-side door, jumped up, started the truck, and pulled out of the lot.

“You going to tell me what your plan is at any point?” Bobby asked.

“Once I get rid of our visitors, we board the boat. Not complicated.”

Bobby said something, but Conor couldn’t make it out over the sound of the truck’s engine. He kept the truck in first gear as he set it on a direct path to the rear of the sedan. The truck’s headlights revealed two men turning around in their seats to watch the truck coming toward them. Conor glanced over at the motor gun boat and saw someone in the pilothouse, as well as a plume of dark exhaust spouting from the boat’s stern.

Ten feet from the sedan, the passenger-side door opened, and he punched the gas. The force of metal on metal closed the door. The truck picked up some speed as it began to push the sedan toward the end of the wharf, but progress slowed as it fought the braking power of the car. More gas and the sedan and truck neared the end of the quay. The sedan balanced on the wharf’s edge momentarily before tumbling into the harbor.

Conor jumped out of the cab and rushed to the back of the truck. Emily was on the ground, helping Eve jump down. Gunnar was right behind her. With the truck engine silent, the throaty sound of the motor gun boat’s engines filled the night. Conor was last to board.

“Get them below, Emily. Bobby, tell the captain that now would be a good time to shove off. Those two guys might be good swimmers.”

Conor heard the car before he saw it, but the headlights quickly found him on the aft section of the deck. The car skidded to a stop under a streetlight. The driver got out, then the passenger. Eklof.

Conor reached for his Colt, but before he could raise it, Eklof fired off two rounds. A deckhand on the foredeck tossed the last line into the water and took cover behind the craft’s superstructure. As the gun boat started to drift from the quay, Conor fired two rounds, shattering the window of the door that Eklof was using as cover. The driver began firing as well, rounds whizzing over Conor’s head. Bobby and Emily started firing from the bridge, and soon the driver fell to the ground behind his door.

As the gun boat pulled forward, Eklof sprinted toward the stern. Conor pulled the trigger of his Colt, but the gun’s slide snapped back, signaling an empty magazine. He dropped the gun on the deck as Eklof leaped and landed on the aft deck, losing his balance due to the accelerating boat, which, luckily, kept him from firing accurately. Before he could regain his balance, Conor raced toward him. Jumping, he planted both feet into Eklof’s chest. Eklof’s pistol flew into the air and landed in the boat’s prop wash, while Conor landed on his back, knocking the air from his lungs.

Eklof struggled to his feet, also gasping for air. He charged Conor, who had barely gotten to his feet, and landed on him. Eklof wrapped his arms around his chest, pinning Conor’s upper arms against his body. Eklof landed one headbutt, then another. Conor’s vision blurred. He raised his right arm and, before Eklof could launch another headbutt, grabbed the man’s ear and ripped it from his head; blood gushed, covering Conor’s hand, and Eklof let out a scream as he rolled off Conor and grabbed the side of his head. Conor, his head pounding from the headbutts, rolled on top of Eklof, grabbed his hair, and started pounding his head on the deck.

“You. Don’t. Ever. Hit. A. Woman,” Conor screamed. Each word was punctuated with Eklof’s head slamming into the deck. Blood pooled under it, and his eye patch had come loose. The eye socket looked like a dried peach pit.

Conor heard Eklof’s short, hoarse breaths, and he rolled off the man, grabbed his legs, and dragged him toward the stern, letting his body slip into the churning water with no fanfare, no emotion.

When Conor turned, he noticed a commotion on the port side of the wheelhouse. Emily was bent over a body. He ran forward, the motor gun boat picking up speed. When he reached Emily, he saw that she was tending to a wounded man. Bobby Heugle. 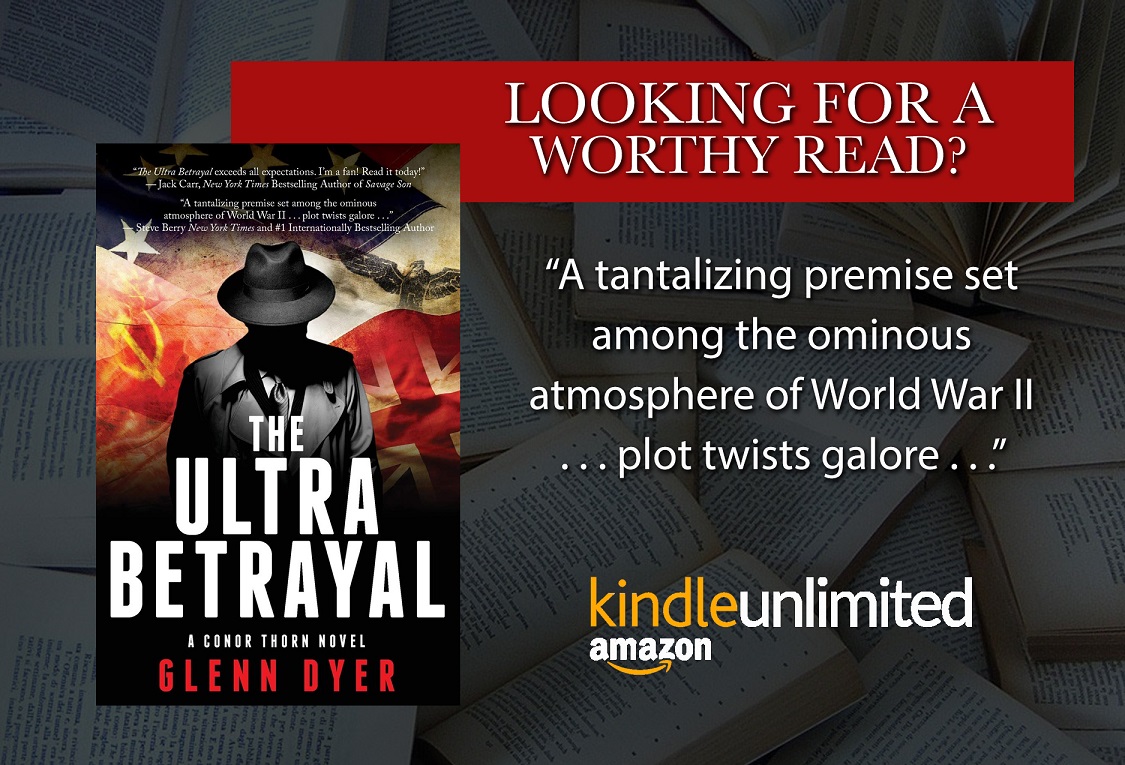 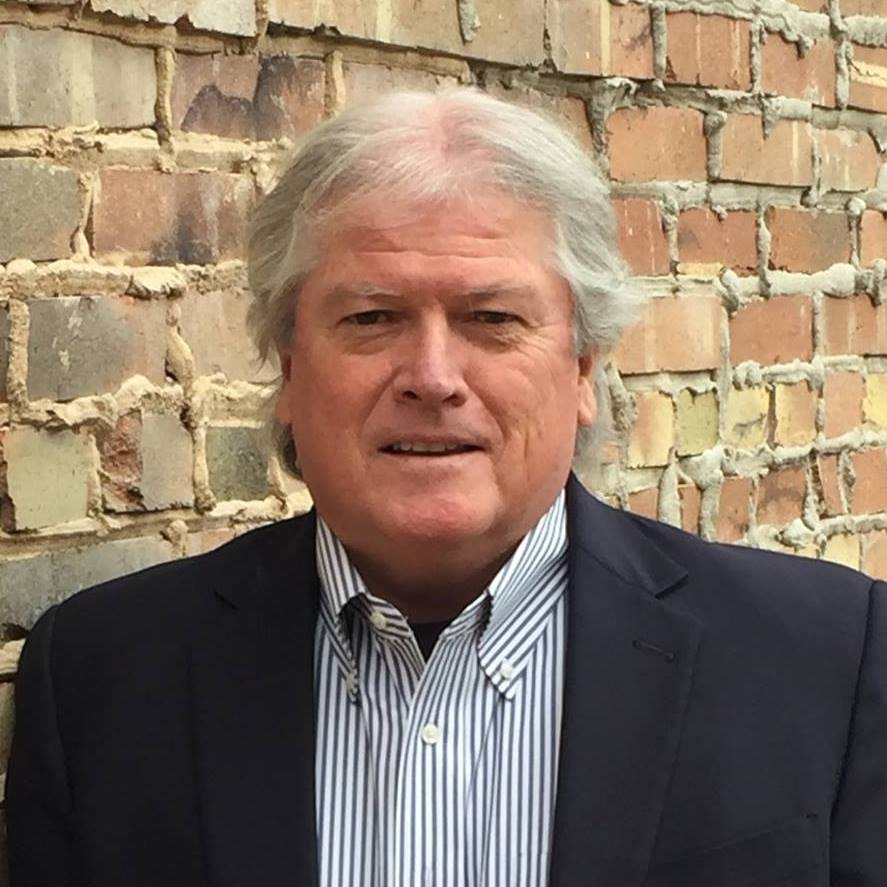 GLENN DYER is a former commercial television executive whose career spanned thirty-seven years. That career took him to cities such as Salt Lake City, Dallas, Washington, DC, and Denver. He returned to Park City, Utah in retirement in 2013 and began writing full-time. He has long been captivated by the events of World War II and couples this fascination with his passion for historical thrillers with the publication of The Torch Betrayal and The Ultra Betrayal, both books in the Conor Thorn Series. He and his wife Chris have three children, all of whom live too far away. Visit his website at www.glenndyer.net and follow him on Twitter @duffy_dyer and Instagram @glennduffydyer.