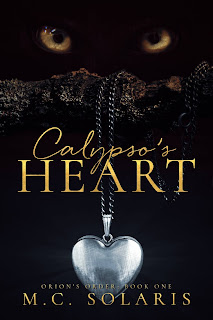 If you enjoy Psy-Changeling and Black Dagger Brotherhood, this new series is right up your alley!

Do you dream of ridiculously hot men? Okay, maybe you do. (And yes, I'm well aware I should lay off the romance books before bed.) But do you actually ever meet those men you dream about in real life? I didn't think so. That's probably a good thing though because I have... And these men from my dreams have done nothing but pull the rug of reality out from under me... which was how I fell and ended up in a world that I thought only existed in romance books.

My name is Caly (AKA Callie) and I'm just an ordinary single woman living the LA dream... paycheck to paycheck. Except whose dream is it? I'm not really sure... but it's not my dream. Especially because I have really weird dreams... like really weird. Then again, everyone has weird dreams, right?

I am an alpha wolf shifter and leader of Orion's Order, a pack of... well, not wolves. We're an unconventional pack of highly skilled specian hunters that do one thing: hunt the evil in our world. And we were hired by SILE (Species Investigative Law Enforcement) to hunt a bloodthirsty criminal who is infamously untraceable. That was until an irresistible female brought an unexpected twist to our hunt and set things in motion... a motion that has left my pack and our world forever changed.

Welcome to The Order and a secret world of magic and mystery, where a pack of unlikely friends find love and fight against an ancient evil force.

Devour this addictive series at your own risk…

CALYPSO’S HEART is an adult paranormal wolf shifter romance. If you like swoon-worthy males, heroines with feminine strength, an engaging plot, satisfying relationships, steamy love stories, happy ever afters, and getting sucked into a supernatural story, then you’ll want to immerse yourself in the world of species!

"It has the elements you need - love, pain, heartache, action, revenge, some light comedy, etc. I thought the sex scenes were SPOT ON! Like damn those were great. I really felt immersed in it at times and I felt transported into the story." ★★★★★

“The descriptions and imagery are on point. It’s easy to picture the characters and scenes. I like the multiple POV shifts to better understand and immerse myself in the character’s mind. The sex scenes are steamy and kept me turning the pages." ★★★★★

“...if you are looking for a book that punches you in your face, right out the gate, with unrealistic action, tasteless sex scenes, and emotional turmoil, this won't be it. Go watch Shameless instead. But if you are looking for something that unfolds at a pace that gives you time to decipher the characters, setting, and complexities of the story that is to come, then this is for you...” ★★★★★

“...at one point in the book, a group of characters are all introduced in a short amount of time. While this might not be standard protocol for fictional stories, it's realistic. Trust that it was done with purposeful intent. Without giving away too much about the story, you get to learn about a pack of males in their environment, doing what males do...” ★★★★★

Blake walked over to Caly who was still playing dishwasher at the kitchen sink. His body was just inches away from pressing up close behind her when he reached around either side of her body to place the dishes in the warm and soapy sink. With his hands tangled with hers in the sudsy water, he pressed in close to her backside and kissed her neck. He didn’t care if anyone saw. Hell, it was good if they did see because he was publicly claiming her (as if it wasn’t clear enough already).
“I like how you look in my clothes,” he whispered in her ear.
God, she suddenly remembered that she was the Midol period model. Hot. And it was literally starting to get hot with him behind her all close like that.
“Thank you for the coffee and muffin this morning. It honestly was—”
The most thoughtful thing anyone has ever done for me and I cried.
“Really thoughtful.”
“My pleasure," he said in a low voice only meant for her.
She shuddered at the vibrations coming from his chest. It felt as if she was pressed up to a bass speaker. The source of vibrating heat at her back disappeared when Blake rolled away and leaned against the counter in a smooth motion.
As if he didn’t just tease her, he casually continued the conversation, “I intended to have Felix stay in the room with you when you woke but he was hell-bent on following me around.”
Damn if that wasn’t the icing on the cake to her already melting heart.
Speaking of which, where is Felix? she wondered.
As if he read her mind, he gestured with his head to where the twins were sprawled out on the massive couches. And, yeah, Felix was there curled up on Rhyker’s chest. It was a cat nap triad.
See, Caly thought with a smile. She knew Rhyker was a big ol’ softy under that bad boy facade.
“Who usually cleans up around here?” she asked, placing another dish in the dishwasher.
“The general rule is clean up after yourself. And, well, we haven’t all sat down and had a meal together like that in…” He paused in thought. “Ever.”
“Ever?” Caly said with brows popped.
“Sure, sometimes we eat at the same time but it’s more like someone will grab something quick, like a bowl of cereal or a muffin. Or we’ll just order pizza like last night. Usually, the only ones cooking meals are the twins and they tag team and have their own system down. And, yeah, the twins do the shopping and everyone just pitches in for groceries. Once we tried to take turns on the shopping task but that turned out into a brawl when the bacon was forgotten.”
She laughed as he helped her load the last couple of dishes.
“By the way, breakfast was good. Thank you.” He kissed her on the cheek and she blushed.
As if he liked her reaction, he turned her chin toward him with the crook of his finger and kissed her. It was slow as if savoring his favorite dessert. He wanted to take her right there. He imagined lifting her to the edge of the counter, settling between her thighs, slipping his hoodie over her head, leaning down to taste...
Later, he commanded his mind to cut off the fantasy. But that didn’t mean he couldn’t deepen the kiss. When his tongue slid in to dance with hers, a wolf whistle sounded from the twins' direction. Blake sent them the middle finger while his attention remained on Caly. He playfully nipped at her lower lip and the corners of his lips turned up in a closed-lipped smile. He took a step back leaving some space between them.
“Come on. I’ll show you around the rest of the house.” He tried to sound casual as if that kiss did not just make him want to only show her his bedroom.
Putty. Her legs were putty. It took a moment for them to receive the command from her brain that told them to move. The things this male did to her. Yeah, she was screwed. She recalled the tender moments and deep intimacy they shared last night. She remembered feeling safe while sleeping peacefully and when she blinked her eyes open, she was greeted with hot coffee and a muffin. And, yeah, now the PDA. She felt her mind hop back on the overanalyze express.
Stop, she commanded the railroad conductor. She had to get off that train, and fast... because it was so not the time for that merry go round.

M.C. Solaris’s life took an unexpected turn during the super blood moon eclipse on January 20, 2019. She woke up and began writing bios for her imaginary friends that she met that day. As soon as the pen hit the paper (or fingertips to the iPhone), she couldn’t stop. It was kind of like one of those fire hydrants, spewing copious amounts of water all over the place. The characters and their stories just flowed out of her. She is honored to be the scribe, getting to share her friends’ stories. You can read all about her gifted friends in the Orion’s Order series (Book 1 is Calypso’s Heart).

On a personal note, M.C. Solaris is actually the pseudonym of Marina Schroeder, women’s health enthusiast and lover of all things paranormal romance (PNR) and happily ever after (HEA). When she is not curled up on the sofa with her partner’s oversized hoodie, a PNR novel, peppermint tea, and one of her three cats, you will find her either at the ocean with her toes in the sand or in a forest hugging a tree. Well truthfully? There is one more place you might find her: trolling the aisles of Whole Foods for a satisfying combination of salty and sweet while hiding in her partner’s hoodie… like any proper PNR-writing introvert.

Want to get the latest scoop, sneak peeks, and short shares all about her imaginary friends? Go to www.mcsolaris.com  and sign up for the newsletter.

Welcome to The Order! 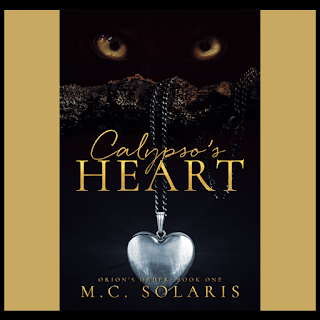