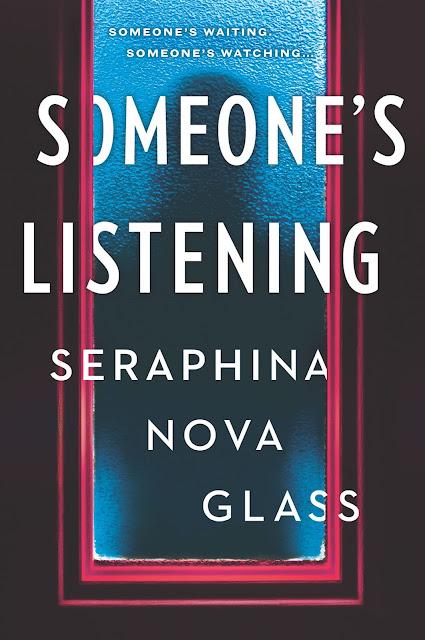 Of course Liam was at Faith’s book launch with her. But after her car crashes on the way home and she’s pulled from the wreckage, nobody can confirm that Liam was with her at the party. The police claim she was alone in car, and they don’t believe her when she says otherwise. Perhaps that’s understandable, given the horrible thing Faith was accused of doing a few weeks ago.

And then the notes start arriving—the ones literally ripped from the pages of Faith’s own self-help book on leaving an abusive relationship. Ones like “Secure your new home. Consider new window and door locks, an alarm system, and steel doors…”

Where is Liam? Is his disappearance connected to the scandal that ruined Faith’s life? Who is sending the notes? Faith’s very life will depend on finding the answers.

Momma Says: 4 stars⭐⭐⭐⭐
From the eye-catching cover to the creepy title to intriguing blurb, Someone's Listening grabbed my attention and raised my expectations pretty high. Now, that could've gone either way, and I usually try to avoid assumptions one way or the other when I crack open a new book. Honestly, I just couldn't help it with this one, and it did not disappoint. Other than a few small lags in the middle, this psychological thriller kept me turning the pages to see what would happen next. Faith drove me a bit crazy with her choices, and I really wanted to give her a good shake at times. That said, an unlikable main character isn't a dealbreaker for me, especially in the thriller genre. Likable character or not, this is one edge of your seat story. The story is fast-paced other than that few small exceptions already mentioned, and we get a fair amount of red herrings to sift through. Speaking of red herrings, I did manage to guess correctly, but Seraphina Nova Glass knows the art of psychological thrillers and utilized it wonderfully. She made me doubt my guess more than once, and by the end, I wasn't at all certain. So, to sum it up, this psychological thriller is everything I expected, and I'll be on the lookout for whatever this author does next.

WHEN I WAKE UP, IT’S BLACK AND STILL; I FEEL A light, icy snow that floats rather than falls, and I can’t open my eyes. I don’t know where I am, but it’s so quiet, the silence rings in my ears. My fingertips try to grip the ground, but I feel only a sheet of ice beneath me, splintered with bits of embedded gravel. The air is sharp, and I try to call for him, but I can’t speak. How long have I been here? I drift back out of consciousness. The next time I wake, I hear the crunching of ice under the boots of EMTs who rush around my body. I know where I am. I’m lying in the middle of County Road 6. There has been a crash. There’s a swirling red light, a strobe light in the vast blackness: they tell me not to move.

“Where’s my husband?” I whimper. They tell me to try not to talk either. “Liam!” I try to yell for him, but it barely escapes my lips; they’re numb, near frozen, and it comes out in a hoarse whisper. How has this happened?

I think of the party and how I hate driving at night, and how I was careful not to drink too much. I nursed a glass or two, stayed in control. Liam had a lot more. It wasn’t like him to get loaded, and I knew it was his way of getting back at me. He was irritated with me, with the position I’d put him in, even though he had never said it in so many words. I wanted to please him because this whole horrible situation was my fault, and I was sorry.

When I wake up again I’m in a hospital room, connected to tubes and machines. The IV needle is stuck into a bruised, purple vein in the back of my hand that aches. In the dim light, I sip juice from a tiny plastic cup, and the soft beep of the EKG tries to lull me back to sleep, but I fight it. I want answers. I need to appear stabilized and alert. Another dose of painkiller is released into my IV; the momentary euphoria forces me to heave a sigh. I need to keep my eyes open. I can hear the cops arrive and talk to someone at a desk outside my door. They’ll tell me what happened.

There’s a nurse who calls me “sweetie” and changes the subject when I ask about the accident. She gives the cops a sideways look when they come in to talk to me, and tells them they only have a few minutes and that I need to rest.

Detective John Sterling greets me with a soft “Hello, ma’am.” I almost forget about my shattered femur and groan after I move too quickly. Another officer lingers by the door, a tall, stern-looking woman with her light hair pulled into a tight bun at the base of her skull. She tells me I’m lucky to be alive, and if it had dropped below freezing, I wouldn’t have lasted those couple hours before a passing car stopped and called 911. I ask where Liam is, but she just looks to Sterling. Something is terribly wrong.

“Why won’t anyone tell me what happened to him?” I plead. I watch Detective Sterling as he picks his way through a response.

“The nurse tells me that you believe he was in the car with you at the time of the accident,” he says. I can hear the condescension in his voice. He’s speaking to me like I’m a child.

“They said ‘I believe’ he was? That’s not a— That’s a fact. We came from a party—a book signing party. Anyone, anyone can tell you that he was with me. Please. Is he hurt?” I look down at my body for the first time and see the jagged stitches holding together the bruised flesh of my right arm. They look exaggerated, like the kind you might draw on with makeup and glue for a Halloween costume. I close my eyes, holding back nausea. I try to walk through the series of events—trying to piece together what happened and when.

Liam had been quiet in the car. I knew he’d believed me after the accusations started. I knew he trusted me, but maybe I’d underestimated the seeds of doubt that had been planted in his mind. I tried to lighten the mood when we got in the car by making some joke about the fourteen-dollar domestic beers; he’d given a weak chuckle and rested his head on the passenger window.

The detective looks at me with something resembling sympathy but closer to pity.

“Do you recall how much you had to drink last night?” he asks accusingly.

“What? You think…? No. I drove because he… No! Where is he?” I ask, not recognizing my own voice. It’s haggard and raw.

“Do you recall taking anything to help you relax? Anything that might impair your driving?”

“So, you didn’t take any benzodiazepine maybe? Yesterday…at some point?”

“No— I— Please.” I choke back tears. “I don’t…” He looks at me pointedly, then scribbles something on his stupid notepad. I didn’t know what to say. Liam must be dead, and they think I’m too fragile to take the news. Why would they ask me this?

“Ma’am,” he says, standing. He softens his tone. This is it. He’s going to tell me something I’ll never recover from.

“You were the only one in the car when medics got there,” he says, studying me for my response, waiting to detect a lie that he can use against me later. His patronizing look infuriates me.

“What?” The blood thumps in my ears. They think I’m crazy; that soft tone isn’t a sympathetic one reserved for delivery of the news that a loved one has died—it’s the careful language chosen when speaking to someone unstable. They think I’m some addict or a drunk. Maybe they think the impact had made me lose the details, but he was there. I swear to God. His cry came too late and there was a crash. It was deafening, and I saw him reach for me, his face distorted in terror. He tried to shield me. He was there. He was next to me, screaming my name when we saw the truck headlights appear only feet in front of us—too late. 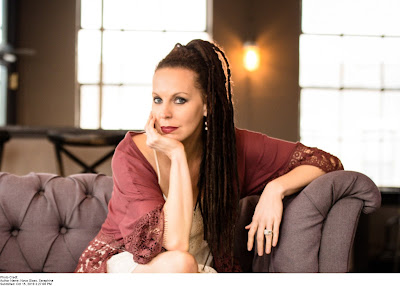 Seraphina Nova Glass is a professor and Playwright-in-Residence at the University of Texas-Arlington, where she teaches Film Studies and Playwriting. She holds an MFA in playwriting from Smith College, and has optioned multiple screenplays to Hallmark and Lifetime. Someone's Listening is her first novel.