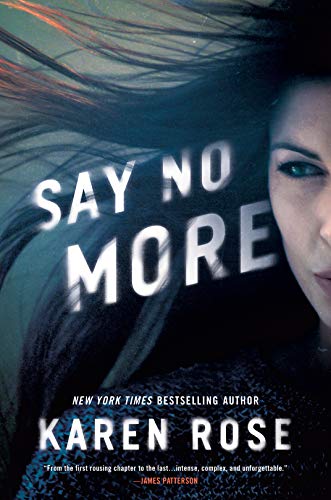 Mercy Callahan thought she'd escaped the cult decades ago, but its long fingers are reaching out for her again in this electrifying novel in the Sacramento series by New York Times bestselling author Karen Rose.Seventeen years ago. That was the last time Mercy Callahan saw Ephraim Burton, the leader of the twisted Eden cult where she was raised. But even though she escaped the abuse and terror, they continue to haunt her.When her brother Gideon discovers new evidence of the cult's--and their victims'--whereabouts, Mercy goes to Sacramento to reconnect with him. There, she meets Gideon's closest friend--homicide detective Rafe Sokolov. From Rafe, she receives an offer she never knew she needed: to track down Ephraim and make him pay for everything.But Ephraim, who had thought Mercy long dead, discovers she is in fact alive and that she is digging around for the cult's secrets. And now he'll do anything to take her back to Eden--dead or alive.

Momma Says: 4 stars⭐⭐⭐⭐
Say No More is the second book in the Sacramento series, and it does feel like the story continues from that first book. Nevertheless, the author does give enough information that I didn't feel lost as I was reading even though I haven't read that first book. Now, I don't know if the first book is as long as this one, but the length surprised me. In a time when most are looking for instant gratification, this is one very long book. A very long book that is surprisingly light on any lags in the story, which says a lot about the author's talent for storytelling. There is a lot going on as well as quite a few characters to keep track of, but the further into the book I got, the easier it was to keep up with who was doing what. The story does have some violence and it touches on some touch subject matter, but any time a cult is involved in the plot, I kind of expect things to be dark. What it all boils down to is that this one held my interest from start to finish, and while it may be my first read by Karen Rose, it will not be my last.
Karen Rose is the award-winning, #1 international bestselling author of some twenty novels, including the bestselling Baltimore and Cincinnati series. She has been translated into twenty-three languages, and her books have placed on the New York Times, the Sunday Times (UK), and Germany's der Spiegel bestseller lists.
at August 10, 2020